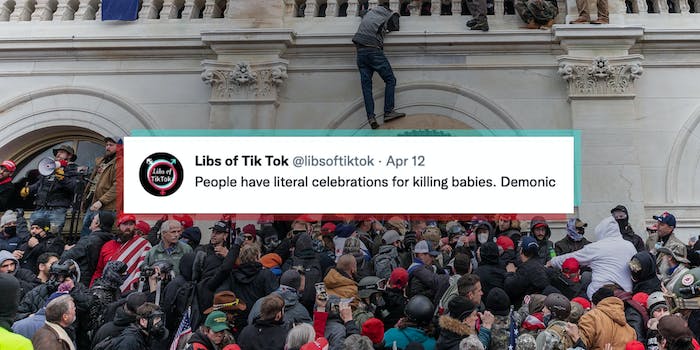 In the few short years since it sprung from obscurity, Libs of TikTok has become among the most influential conservatives on Twitter. The anonymous woman behind the account primarily uses her immense platform of more than 630,000 followers to attack liberals and LGBTQ people.

Libs of TikTok regularly misconstrues the positions and statements of advocates for liberal causes like LGBTQ advancement and racial equality, such as by misgendering transgender people and maligning civil rights protesters as criminals. Libs of TikTok recently boasted that she’s gotten “several teachers” fired, too, for what she described as “grooming” and “being evil.”

Over the weekend, however, it emerged that Libs of TikTok hasn’t solely confined its activities to the internet. As software developer Travis Brown first reported, someone tweeting from the Libs of TikTok profile attended the Jan. 6 Capitol protest.

As for the woman behind the now-famous account: Records show that Libs of TikTok cycled through several Twitter handles before settling on the one that brought her internet fame. The Daily Dot confirmed that archives show three other users all had the same user identification number as Libs of TikTok, indicating that these are her previous handles.

Libs of TikTok deleted most of her tweets from the first few months after launching November 2020. In its early days, it primarily existed as a reply account that routinely showed up in the comments of prominent conservatives on Twitter.

Among Libs of TikTok’s few remaining tweets from this timeframe, the Daily Dot found some that are identical to those included in archives of @shaya_ray’s tweets, another apparent old handle of hers.

Libs of TikTok was still going by @shaya_ray on the day of the Capitol riot. Archives show that several of her tweets include images and video from the protest. “Tear gas in action,” she wrote in one. In another, she said, “They were rubber bullets from law enforcement. One hit right next to me.”

Libs of TikTok didn’t respond to the Daily Dot’s requests for comment.

As Libs of TikTok’s profile has grown, so has the scrutiny—for better and worse. In February, the New York Post interviewed her for a story about how she exposes “lefty lunacy.” Media Matters for America recently wrote a piece about Libs of TikTok’s influential anti-LGBTQ rhetoric. Twitter subsequently, temporarily, suspended the account for violating its hate speech policy.

None of the aforementioned coverage revealed the identity of the woman behind the account.

Building off others’ research, in recent days several have surmised that Libs of TikTok is run by a realtor in Brooklyn, New York. The accountholder noted “real estate investor” under one of the previous handles.

On Monday, Rocco Castoro, formerly Vice‘s former editor-in-chief, reported that a person with this name and Brooklyn residence has registered the blank domain libsoftiktok.us. A reverse search for the phone number included in the domain registration turns up a profile for a New York-based realtor of the same name.

Federal Elections Commission donation records show that a Brooklyn-based realtor of the same name donated to Republicans in 2020 and 2021.

The woman who’s reportedly behind Libs of TikTok told the Post that she lives in California and quit her job to run the account.

The registrar of libsoftiktok.us didn’t reply to an email sent to the address associated with its account on Monday afternoon.

It’s not clear who exactly runs Libs of TikTok. It’s possible that the name linked to it on various platforms is merely a pseudonym. It’s also possible that whoever registered libsoftiktok.us has nothing to do with the Twitter account of the same name.

It is clear that, as much as she likes exposing others online, whoever is behind Libs of TikTok isn’t interested in being exposed herself.

“I don’t do this for money or fame,” she told the Post. “I’m not some politician or blue-check journalist.”