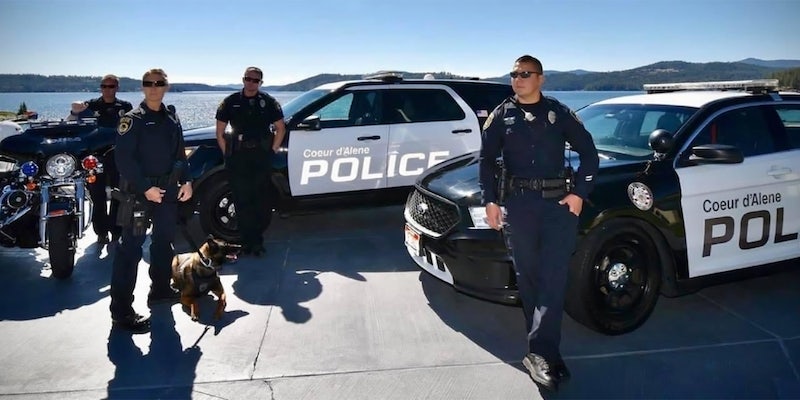 The white nationalists were charged with planning to riot at a Pride event.

Over the weekend, 31 members of the white supremacist Patriot Front were arrested en route to a Pride event. The arrests have the far-right once again arguing about whether Patriot Front is an actual organization or a group secretly run by the feds.

Police apprehended members of Patriot Front on their way to an LGBTQ Pride event in Coeur d’Alene, Idaho on Saturday. The group reportedly planned to protest and disrupt the event. Authorities say they had shields, helmets, spears, and at least one smoke grenade.

Members, including Patriot Front founder Thomas Rousseau, were charged with planning a riot. They’re due to be arraigned on Monday. It’s not known how they intend to plea to the misdemeanor charges.

News of the arrests sent shockwaves through online extremist communities.

Rumors are flying that Patriot Front isn’t a genuine white supremacist group, but a law enforcement operation designed to ensnare people on the far-right, which tend to crop up whenever Patriot Front is in the news. Others are pushing back against these unsubstantiated allegations.

The episode has sparked another wave of infighting.

The Gateway Pundit is among those pushing the unfounded, yet persistent theory that Patriot Front is actually run by the Federal Bureau of Investigation. The far-right outlet based this allegation on reports that police were tipped off about the Patriot Front’s plans by informants within the group and because one arrestee purportedly carried a megaphone with the FBI logo on it.

“Here is video of their arrest,” the outlet wrote. “Count the feds.”

Others echoed the same and similar claims.

While many are convinced that Patriot Front is actually law enforcement, others argue that the real conspiracy is convincing people that they’re cops.

“Most who call groups like Patriot Front ‘fed honeypots’ know they are lying,” the post states. “…They do this because if they were to actually criticize these groups for what they stand for, they realize their audience will get curious and even want to join a nationalist org.”

Other extremists directly targeted the Gateway Pundit. “Why does Gateway Pundit tell stupid lies? What do they even get out of it?” wrote one on Telegram.

Several pointed out that the megaphone the Gateway Pundit deemed evidence that Patriot Front is with the feds actually appears to say “abolish FBI.”

“You really think the FBI puts property of the FBI stickers on their bullhorns?” wrote one.

Patriot Front supporters responded angrily. One went so far as to say they wouldn’t “be shedding a single tear” if a person who accused the group of being a federal operation became “a bullet-riddled corpse.”

Meanwhile, Nick Martin of the Informant reported that some of Patriot Front’s sympathizers have begun targeting the officers believed responsible for arresting them in Idaho. Far-right figures are doxing and maligning authorities they think had a hand in the case.

On Monday, the Daily Dot found posts with officers’ purported home addresses and phone numbers, and various unfounded claims about officers themselves.

One commenter in a Proud Boys friendly Telegram channel described a police captain as an “anti-American and pedophile apologist” and accused him of “arresting anybody that attempts to peacefully protest LGBT grooming of children.”

The far-right may not agree on whether Patriot Front is actually a police or FBI dragnet, but there is one thing uniting both sides of the extremist ecosystem: loathing for law enforcement.

“Let me very clear here,” White said, according to Mary Emily O’Hara. “These were not law enforcement officers that we arrested. There were members of the hate group Patriot Front. These were not antifa in disguise, nor were they FBI in disguise.”