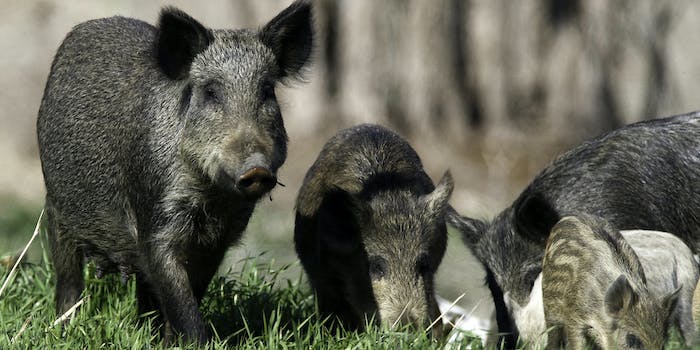 'He was a prophet and we rejected him.'

The man who was mocked on Twitter in 2019 for raising concerns about feral hogs is now being defended as a modern-day prophet due to a “feral swine bomb” that is ravaging the San Francisco Bay Area.

The New York Times detailed in an article on Tuesday how feral pigs have been threatening drinking water and damaging property outside the Golden Gate City, leading many local residents to seek out their destruction.

“They are tearing up lawns, ripping through golf course fairways, threatening the drinking water and disturbing the harvests at Napa vineyards,” the Times wrote. “Many Californians want them dead.”

The issue has become so significant that legislation was introduced in California last month that would make it easier for feral swine to be hunted. While hunters are currently required to purchase a $25 “tag” in order to hunt a single pig, the bill would allow hunters to target an unlimited number of swine instead.

“In California, 56 of the state’s 58 counties have wild pigs. The swine are inflicting a mounting economic toll in Lafayette, a suburb in the East Bay, where the pig invasion seems most acute,” the Times added. “Before the pandemic the city shelled out $110,000 when pigs, rooting for grubs, churned soccer and baseball fields like a rototiller.”

The financial costs—as well as concerns over water supply contamination due to the many diseases feral swine can spread—have led residents to begin recognizing the havoc states such as Texas have long dealt with.

The situation quickly led many Twitter users to remember Arkansas resident Willie McNabb, who became the talk of the internet in 2019 after weighing in on a gun control debate at the time.

Country singer Jason Isbell had argued that no American needed an AR-15-style weapon, leading McNabb to famously question how else he would defend his family from “30-50 feral hogs.”

McNabb was quickly inundated with countless mocking tweets from those who seemingly viewed his concerns as outlandish. The term “30-50 feral hogs” became an instant meme and was widely referenced online.

But in light of San Francisco’s plight, McNabb has suddenly become an internet folk hero, even if some users’ supportive remarks are merely a continuation of the meme.

The New York Times report has since been flooded by users who appear to be arguing roughly the same thing: “He tried to warn us.”

In countless tweets, users argued that the so-called “feral hogs guy” had been proven right.

Countless users even suggested that McNabb was long overdue for an apology.

“Nobody on this site has been owed more of an apology than the 30-50 feral hogs guy,” @ChrisLedf wrote.

Speaking with the Daily Dot, McNabb says that not a day has gone by since 2019 where he hasn’t been reminded of his initial tweet.

“It feels like I’m stuck in some type of perpetual groundhog day—like I’m reliving the same day over and over again,” he said. “I do remember feeling when the tweet first happened a bit overwhelmed—which was most likely my naïveté about social media and how far-reaching it can be.”

McNabb says his intention was never to politicize the gun debate and that the longevity of his tweet speaks to legitimate concerns regarding the spread of feral hogs. The current praise of McNabb also seems to be divorced from the gun control debate as well, with the majority of users focused on the growing feral pig phenomenon.

“My state of Arkansas received $3.4 million from the Federal Government three months after my tweet,” he said. “There have been many great articles written and segments produced on various media platforms about feral hogs since then. All of these things help address the issue that they are real and a real problem for millions of Americans.”

McNabb says overall his interactions online have been positive and that he enjoys the memes.

“I quickly learned to be more careful in what I say, and how I express my thoughts. As I tell my kids—you can only control what you can control—and that starts with how we speak to each other,” he added. “Be respectful, kind, and decent—you never know where someone is coming from until you engage and listen.”

And given that he will likely always be known as the feral hogs guy, McNabb says he has embraced his role of an advocate for those affected by wild pigs. Whether the meme of the 30-50 feral hogs lives or dies now depends on the fate of the pigs themselves.