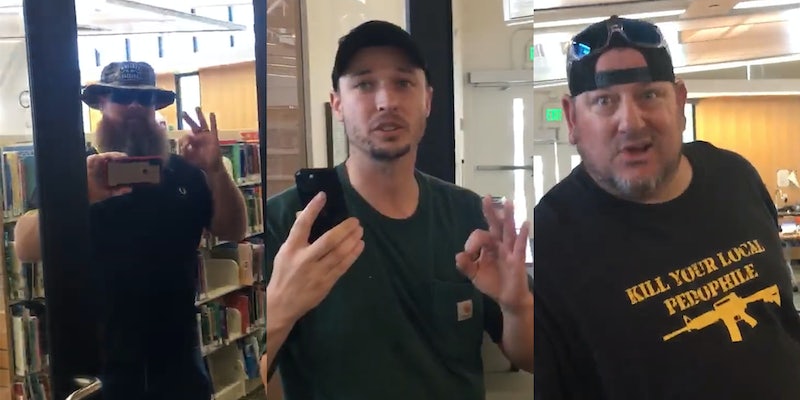 Police are investigating the incident as a hate crime.

A prominent anti-LGBTQ Twitter account posted about a drag queen story hour at a public library in California. Days later, a group of Proud Boys disrupted that event, shouting slurs and frightening those in attendance. The local police department now says it’s investigating the incident as a possible hate crime.

The incident is part of a growing wave of anti-LGBTQ sentiment and legislation sweeping the nation. There’s no single source for the rising homophobia and transphobia, but some believe one Twitter account has more influence than most: Libs of TikTok.

Libs of TikTok is run by Chaya Raichik. Raichik often accuses LGBTQ affirming teachers and others of “grooming” children and has bragged about getting such people fired.

Some have credited Raichik for inspiring Florida’s controversial law ostensibly aimed at expanding parental rights in education that critics deemed the “don’t say gay” bill. The law regulates discussing gender identity and sexuality in schools, prohibiting it for earlier grades and requiring it to be “age-appropriate” for all students, which opponents say is overly vague and subjective.

Other states have passed and proposed anti-LGBTQ legislation in recent months. Some fear that these laws are only the beginning. In April, writer Allison Hope opined in a CNN op-ed, “The anti-LGBTQ backlash could have deadly consequences.” Hope cited a recent incident wherein a stranger accosted a gay couple and accused them of molesting their own children.

Purported members of the notoriously violent extremist Proud Boys busting up a drag queen story hour could be a sign that those fears are coming to fruition.

On May 30, Raichik posted about an upcoming drag queen story hour at a public library in San Lorenzo, California.

On Saturday, a group of men identified as Proud Boys burst into the library and disrupted the event.

“The men began to shout homophobic and transphobic slurs at the event organizer,” local police said in a release. “The men were described as extremely aggressive with a threatening violent demeanor causing people to fear for their safety.”

Panda Dulce, the drag queen who hosted the story hour, told a local news outlet that the men shouted homophobic slurs and accused her of raping children. Police were called. Cops say they diffused the situation but are continuing to investigate.

Panda Dulce told an ABC affiliate that she and the children present were terrified of the men.

A video posted on Twitter shows one man wearing a black and yellow shirt with an assault-style rifle on it. “Kill your local pedophile,” it says. The shirt is in the shades of black and yellow that Proud Boys wear.

Other men wore clothing in the same colors that also included the far-right group’s name and insignia.

Now some are blaming Raichik for inspiring the men.

Ari Drennen, LGBTQ program director for Media Matters for America, tweeted, “Chaya Raichik of Libs of Tik Tok is going to get somebody killed.”

“This account has gone from posting cringe compilations to target selection for domestic terrorists in like three months flat.”

Many agreed. “That’s quite literally the goal,” wrote @adamtotscomix.

Raichik denies that her tweets had anything to do with the men disrupting the story hour. On Monday, she tweeted that she’s merely “giving free advertisement to beautiful family-friendly Pride events.”

“Support your local PROUD BOYS!!” one commented on the story.

Some Telegram users said that the parents who take their kids to such story hours should be arrested, that the Proud Boys and drag queens should have physical altercations, and worse. Many used dehumanizing language for drag queens generally and Panda Dulce specifically.

“The only thing a drag queen deserves is a rope and a tree,” wrote one.