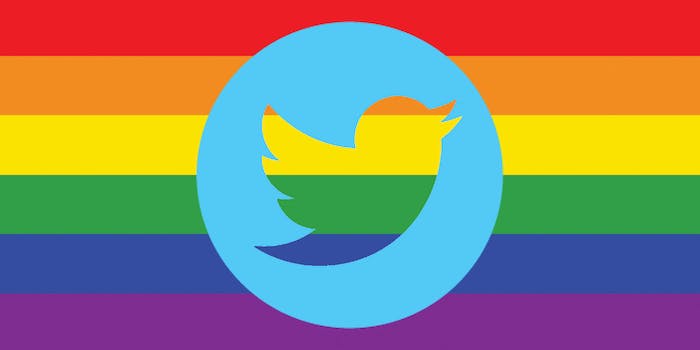 'If Twitter had stepped in in March this wouldn’t be this big a deal.'

Twitter said to the Daily Dot that it bans calling people “groomers” based on their gender identity. But in practice, it often doesn’t enforce this rule.

On Wednesday, the Daily Dot reported that a subreddit post inadvertently intensified pressure on Twitter to ban calling LGBTQ people groomers. “Grooming” is a slur that falsely equates being LGBTQ with being a pedophile. The slur has roots in the term’s original meaning, which refers to how sexual predators coerce and manipulate children in order to abuse them.

After the article published, Twitter provided a statement claiming that calling transgender or nonbinary people “groomers” violates its policies against hate speech.

“We are committed to combating abuse motivated by hatred, prejudice, or intolerance, particularly abuse that seeks to silence the voices of those who have been historically marginalized. For this reason, we prohibit behavior that targets individuals or groups with abuse based on their perceived membership in a protected category,” Lauren Alexander, Twitter’s health product communications lead, said via email.

“Use of this term is prohibited under our Hateful Conduct policy when it is used as a descriptor, in context of discussion of gender identity.”

Twitter also said that it is aware that there are issues with how it enforces this rule.

“We recognize we have more work to do to ensure this content is addressed in a timely and consistent manner and we continue to invest in our automated tools and people teams to identify and address gaps in our enforcement.”

Earlier this week, the Daily Dot reported a tweet calling a transgender woman a groomer to see if it violated Twitter’s policies against abusive behavior.

“After reviewing the available information, we want to let you know [this tweet] hasn’t broken our safety policies,” it said in an email.

“We know this isn’t the answer you’re looking for. If this account breaks our policies in the future, we’ll notify you.”

Via email, Twitter said that it is looking into why the report was denied. It didn’t respond by press time.

Alejandra Caraballo, a clinical instructor at Harvard Law School, was the subject of that tweet.

Caraballo told the Daily Dot on Thursday that transphobia and homophobia increased significantly on Twitter earlier this year, in part due to the steady drumbeats of anti-LGBTQ rhetoric from some large, influential accounts. Caraballo is a transgender woman.

“It was just like vicious trolling, especially against any LGBTQ person that was visible on the platform and it’s continued on,” Caraballo said in a phone conversation. “And it’s only gotten worse.”

Caraballo said she has had uneven success reporting tweets that use the groomer slur.

“Most LGBTQ people on Twitter have had the experience of reporting things and finding that there is no action taken whatsoever,” she told the Daily Dot in a phone conversation Thursday afternoon.

The rising tide of attacks on LGBTQ people isn’t isolated to Twitter. It’s found across the web and is spilling into the real world. Anti-LGBTQ laws have been proposed and passed and there has been an uptick in violence and attacks.

Caraballo pointed to an LGBTQ bar in Brooklyn, New York being burned down, angry Proud Boys disrupting a drag queen story hour, and neo-Nazis getting arrested at a Pride event. All of these have occurred in recent months.

She said that the person who called her a groomer on Twitter, James Lindsay, is possibly “the worst example” of using that term for LGBTQ people. She described it as Lindsay’s “schtick.”

“Then his followers attack whoever it is,” she added.

In fact, Lindsay takes credit for the exponential increase of LGBTQ people and their allies being called groomers.

“Not only do I call them that, a lot and accurately, I think I started the trend,” Lindsay told the Daily Dot via Twitter direct message Thursday afternoon.

Lindsay insists he’s not transphobic or homophobic, however. He defends his use of the term groomer.

“I use ‘groomer’ to apply to cult grooming (thought reform), say into queer Marxist ideology, and sexual predatory grooming, which is not identical but correlates,” he said, adding, “I only call things what they are. I don’t play word games, despite my obvious rhetorical savvy.”

Lindsay provided no evidence that any of the people or entities that he’s called groomers—which includes the Trevor Project, a suicide prevention organization for LGBTQ youth—are groomers in either sense of the term as he defines it.

He said that educating children that LGBTQ people exist isn’t “necessarily” grooming, but that it is such if it is done with the intent of teaching them “to accept the ideological conclusions and views of queer Marxism and ‘gender ideology.'”

However Lindsay may personally define the term, the vast majority of people understand the term “groomer” to refer to pedophiles and realize it is being used to demonize LGTBQ people.

That’s the point, Caraballo says. She said that attempts to redefine what groomer means are just “word games.” She also believes such attacks on LGBTQ people are designed to create a moral panic, which is likely going to escalate.

“We’re seeing this more permissive atmosphere for people to commit violence because the language has shifted and has allowed them to justify the violence, because if you believe LGBTQ people are a threat to children and are harming children, it allows you to justify any means of violence.”

Caraballo said Twitter had a chance to stop the escalation before it got worse, but failed. She believes that the company scaled back enforcement of its policies amid the turmoil over Elon Musk’s since-aborted takeover. Musk said that he wanted Twitter to be as permissive as possible about what types of speech are allowed. Some believe this emboldened right-wing figures and outlets to escalate their hate speech.

“Twitter has generally been better about this but just in the last few months it’s been particularly bad,” Caraballo said. “…If Twitter had stepped in in March this wouldn’t be this big a deal.”

Now the horse is out of the barn and LGBTQ community is paying the price. Caraballo says she hasn’t considered leaving the platform but knows others who have significantly scaled back their use of it due to the LGBTQ abuse.

“I know a lot of trans people who have had a really severely negative effect on their mental health,” said Drennen of Media Matters of the transphobia on Twitter. “It’s a place where a lot of our community is, and it’s really frustrating when you can’t have that experience without hateful people in your mentions and hurling slurs.”

Caraballo said she uses a plugin called Red Block that automatically blocks everyone who likes or retweets a trolling tweet.

She predicts that there would be an uproar if Twitter cracked down on the use of “groomer.”

“Now one of the things they’re afraid of is the backlash,” she said.

Update 7:53 am CT, July 22: Lindsay was suspended following publication. According to a screenshot provided by Caraballo, Twitter said that it was for violating its abusive behavior policy by calling her and other LGBTQ people and groups “groomers.”

The news of Lindsay’s suspension was also shared by Jenna Ellis, a conservative lawyer.