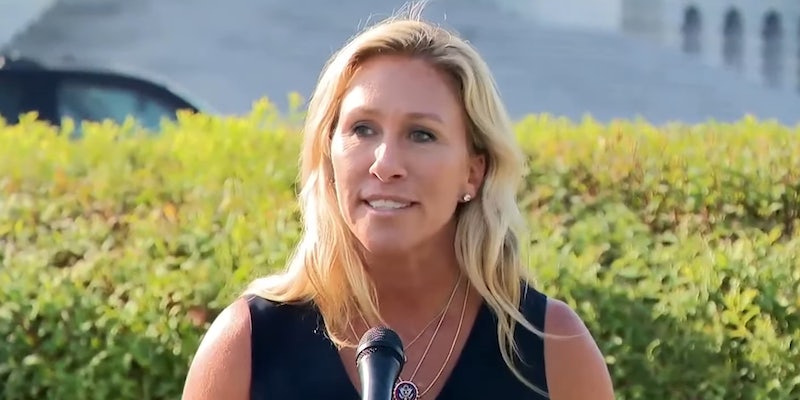 She used a derogatory hashtag.

In a series of posts, Greene used a derogatory phrase to mock and question Dr. Rachel Levine, Biden’s assistant health secretary. Levine was the first openly trans official confirmed by the U.S. Senate to a government position.

In an MSNBC interview, Levine discussed the current Monkeypox outbreak. She was also asked about a recent op-ed she wrote calling for compassion toward the trans community, which has been the focus of unparalleled outrage among conservatives. She also said that the Biden administration should be working to “empower” youth if they choose to transition.

Levine talked about the effect a caring figure can have on young trans people. “One supportive adult” can “make all the difference” for transgender youth, Levine said.

Right-wing hysteria over any openly gay or trans person existing has led to a nonsensical impulse to call anyone discussing LGTBQ issues “groomers.” Conservatives immediately flipped out after Levine discussed helping young people get gender-affirming care.

The Daily Dot is choosing to not repost the slur here.

In response to Greene’s insult, Twitter restricted the ability to interact with or respond to her posts.

“This Tweet violated the Twitter Rules about hateful conduct. However, Twitter has determined that it may be in the public’s interest for the Tweet to remain accessible,” the site wrote. The warning has occasionally been posted on tweets that can cause harm or incite violence, including some of former President Donald Trump’s when he still was on Twitter.