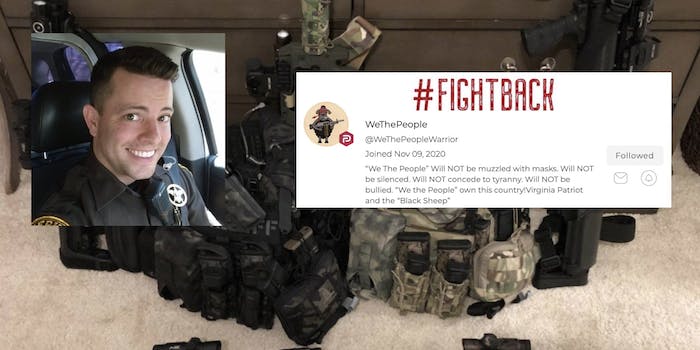 'It's God keeping me from murdering the mentally ill.'

A sheriff’s deputy was fired after making hateful and threatening remarks on a secret Parler account uncovered on Friday.

The account, discovered by independent journalist Molly Conger, is run by former Deputy Aaron Hoffman of the Prince William County Sheriff’s Office in Virginia. According to INSIDENOVA, Hoffman was fired after an internal affairs investigation by the sheriff’s office.

Sheriff Glendell Hill told INSIDENOVA in an email that the agency was notified of “disturbing comments being made on several social media outlets by a deputy sheriff” on Friday. Hill reportedly ordered an investigation into the matter.

“The investigation has concluded and the deputy has been terminated from employment with this agency,” Hill said.

The sheriff’s office released a similar statement on Facebook.

On Friday morning, Conger claimed in a detailed Twitter thread to have linked Hoffman to an account known as @WeThePeopleWarrior on Parler, the social media site popular among conservatives.

The image, a cartoon black sheep with a machine gun, appeared to have been commissioned from an artist online roughly two weeks ago by an individual known as “Grant Tucker.”

Conger claimed that Tucker isn’t an actual person but instead the stage name used by Hoffman as part of his aspiring country music career. Profile images of Tucker on the website where the image was purchased and on music websites look to be of the same person.

Conger was able to tie Tucker to Hoffman after discovering a Facebook profile for the country musician. A photo on the account shows Tucker wearing a Prince William County Sheriff’s Office uniform, complete with a name tag that clearly reads “Hoffman.”

“If this is our time to refresh the Tree of Liberty then let’s not half ass our sacrifice,” the account wrote. “Make it count!”

In another comment regarding a right-wing protest in Washington, D.C., @WeThePeopleWarrior tells other users to “physically take back” their states from left-wing Americans “by force.”

“Find the homes of every Governor, mayor, attorney general, liberal judge, senator, congressman and every major media/social media CEO… find them, remove them from their sanctuary,” @WeThePeopleWarrior says. “Bring the nightmare to where they lay their heads and kiss their loved ones. Show them that they are NOT untouchable.”

In one interaction, notorious Proud Boys member Jeremy Bertino, @Noblebeard on Parler, and @WeThePeopleWarrior talk about fighting alongside one another.

Conger also notes that one photograph posted to the @WeThePeopleWarrior account includes a tactical vest with a “SHERIFF” patch on the front.

“No one seems bold enough to confront me for not wearing a mask,” one post reads. “I guess it’s God keeping me from murdering the mentally ill.”

And in response to news of the “Minor Consent for Vaccinations Amendment Act” bill, @WeThePeopleWarrior said, “I will kill anyone that touches my children without my consent. Not a threat, but a promise!”

The Daily Dot reached out to the Prince William County Sheriff’s Office but did not receive a response by press time.

After Conger’s thread went viral, the department’s social media pages were inundated by commenters demanding that the Parler account be looked into.