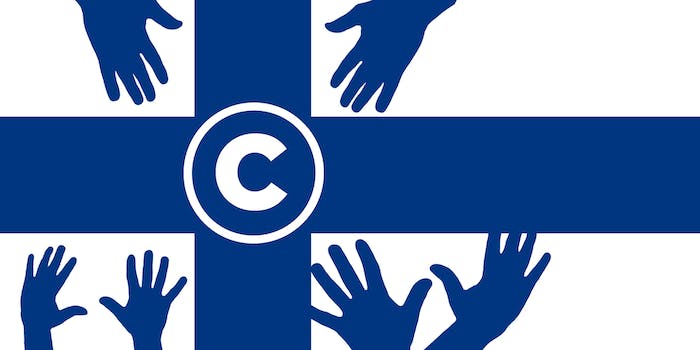 In a huge win for digital advocates, Finnish Parliament will vote on a crowdsourced copyright reform.

Citizen took advantage of the country’s new Open Ministry program, which allows individuals to create a bill online. According to the rules, if it gets 50,000 signatures, it will go before Parliament for a vote.

That’s a tall order for Finland. With a population of just over 5 million, that means almost one in 100 citizens has to sign for Parliament to consider. The measure received a significant bump in signatures mere hours before the six-month window for signatures closed. It has 51,100 as of this writing.

“In Finland today, one peer to peer download is a crime can be punishable up to 2 years in prison, including fines,” Joonas Pekkanen, chairman of Open Ministry, announced as the petition winded down.

Support for the bill came in large part thanks to a zealous copyright enforcement movement. In November, Finnish police, operating on a tip from a pro-copyright industry TTVK, busted into the house of a 9-year-old girl. They then confiscated her Winnie the Pooh laptop.

The girl’s father recounted the story on his open Facebook page, saying the girl had simply tried to pirate a single album she couldn’t figure out how to get by paying for it. The two became something like folk heros for Finns and Internet activists abroad. Though the father had to settle with TTVK for €300 ($391 U.S.), well-wishers showered them with gifts like clothes, a new Macbook pro, and a pirate hat.

On his blog, Pirate Party founder Rick Falkvinge described the copyright reform bill as having “modest goals,” like lessening criminal penalties for small-scale piracy and strengthening fair-use and satire protections.

“The petition succeeding doesn’t mean that it becomes law; just that it will be brought up in Parliament as a law proposal,” Falkvinge wrote. He added of its political implications:

“But it does send a clear message to lawmakers in Finland about what gets votes, which is one of the fastest and most effective ways to shift policy in any country. Politicians will bend over backwards and abandon all ideals in exchange for votes.”