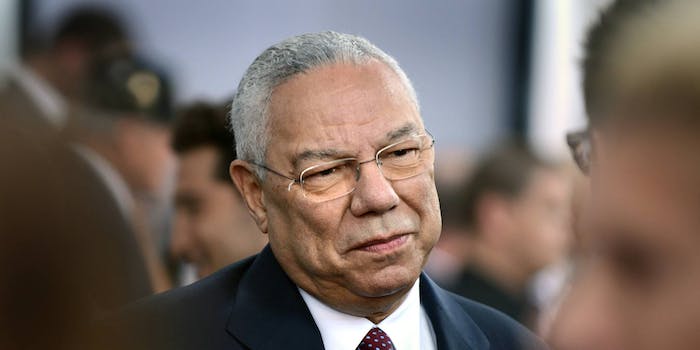 The general is with her.

At an event earlier this week, former Secretary of State Colin Powell announced he will be supporting Democratic nominee Hillary Clinton in the 2016 presidential race.

Powell, a retired five-star general who served as secretary of state in the George W. Bush administration, announced he was backing Clinton during an event hosted business group, the Long Island Association.

Matthew Cohen, a spokesperson for the Long Island Association, told the New York Times that Powell, in his remarks, both praised Clinton and slammed Trump. “He said he would support Hillary Clinton and he also elaborated on several reasons why he felt that Trump was not the right candidate,” Cohen recalled. “He spoke about his inexperience, he spoke about the messages that he’s sending out every day to his supporters, which really paints our country in a negative light across the globe with our allies.”

Until now, Powell has largely been personally tight-lipped regarding his antipathy to his party’s presidential nominee. In an email to CNN host Fareed Zakaria released by DCLeaks.com, Powell slammed the media for reporting Trump’s seemingly endless string of outrageous statements. “You guys are playing his game, you are his oxygen,” Powell wrote. “He outraged us again today with his comments on Paris no-go for police districts. I will watch and pick the timing, not respond to the latest outrage…To go on and call him an idiot just emboldens him.”

That same batch of leaked emails also showed Powell expressing frustration with the Clinton campaign, which has pointed to his use of a private email server while running the State Department to excuse Clinton’s behavior.

“I have told Hilleary’s [sic] minions repeatedly that they are making a mistake trying to drag me in, yet they still try,” Powell insisted to former Clinton adviser Vernon Jordan. “The media isn’t fooled and she is getting crucified. The differences are profound and they know it.”

With his endorsement, Powell joins a number of other of GOP officials in the national security and foreign policy establishment who have crossed party lines to vote for Clinton. That list also includes former Homeland Security Secretary Michael Chertoff, former National Security Adviser Brent Scowcroft, and former Deputy Secretary of State Richard Armitage.