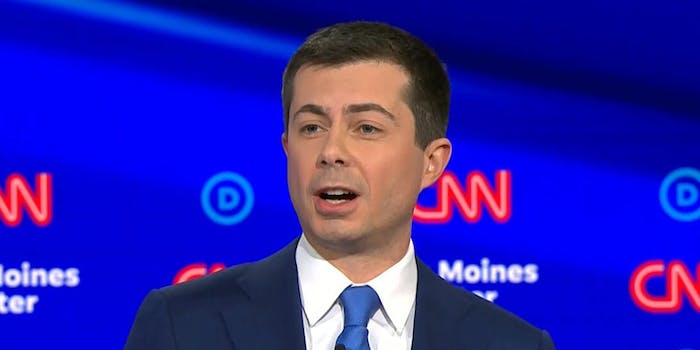 Despite discussing the Iran nuclear deal, the internet heard something much different.

While discussing the Iran nuclear deal, known formally as the Joint Comprehensive Plan of Action (JCPOA), Buttigieg referenced the importance of the letter “J” and the need for cooperation among nations.

“That first letter ‘J’ stood for joint,” Buttigieg said. “We can’t do this alone.”

But the internet was much more interested in a different kind of joint and couldn’t help but take the comment out of context.

“Pete: the letter “j” stands for joint… you know what I mean kids… if Iran is going to nuke us.. might as well smoke em if you got em,” user @MaineSocialist tweeted.

"The J stands for joint."

Other Twitter users noted how useful joints can be when sitting through an absurdly long presidential debate.

“The first letter, “J”, stands for joint, which is what we need to be smoking to get through this debate,” user @Evansbee added.

The first letter, “J”, stands for joint, which is what we need to be smoking to get through this debate.

ok the only thing i just heard from mayo pete was when he said “j stands for joint” #DemDebate pic.twitter.com/BWz0HgIxPi

“When I was in the military, the J stood for joint” -Pete Buttigieg @majorityfm pic.twitter.com/oSUezYLtXN

While Buttigieg, unfortunately, wasn’t referring to the sticky icky, the candidate admits to both smoking and even inhaling on numerous occasions.

The former mayor states on his campaign website that he not only supports marijuana legalization but the elimination of incarceration for drug possession altogether.

I think the takeaway here is clear: We all need to light one up instead of going to war with Iran.