It has nothing to do with Dzhokhar Tsarnaev.

This week, after a series of CNN town halls with leading Democratic candidates, a fascinating topic that’s rarely been discussed became part of a national dialogue: whether the currently incarcerated should have a say in our democracy.

However, it went down in the dumbest way possible.

Sen. Bernie Sanders (I-Vt.) was asked about prisoners getting the right to vote and stood by his position that being convicted of a crime should not be cause for disenfranchisement. Mayor Pete Buttigieg argued the opposite, saying that while he believed in restoring voting rights after people served their sentences, in prison they should not have a say in the matter.

It’s a fascinating and interesting conversation. Could allowing prisoners the right to vote help reduce America’s astoundingly high rate of recidivism? Getting a say in who represents you and participating in one of democracy’s fundamental rights just might help. And if you believe you’re incarcerated because of an unjust cause—like mandatory minimums for drug offenses—why do you no longer get a say in a matter that is directly affecting you?

There are currently 2.2 million people in prison in America, the highest incarceration rate in the world. And it is wildly unrepresentative of society at large, thanks to laws, police forces, and courts that have unfairly and discriminately targeted Black people, stripping them of their voice in society.

But unfortunately, because America is not able to have a rational discussion about anything, the entire debate this week revolved around whether one person would get the right to vote: Dzhokhar Tsarnaev, the Boston Marathon bomber.

Partly, this was because of the framing of the question. Anne Carlstein, a Harvard student, asked Sanders if his idea meant “enfranchising people like the Boston Marathon bomber, a convicted terrorist and murderer.”

Sanders didn’t waver in his answer, not balking at a question designed to elict an emotional response and not a real answer.

However, after the debate, what you got were articles about Bernie Sanders saying the Boston Bomber should vote. 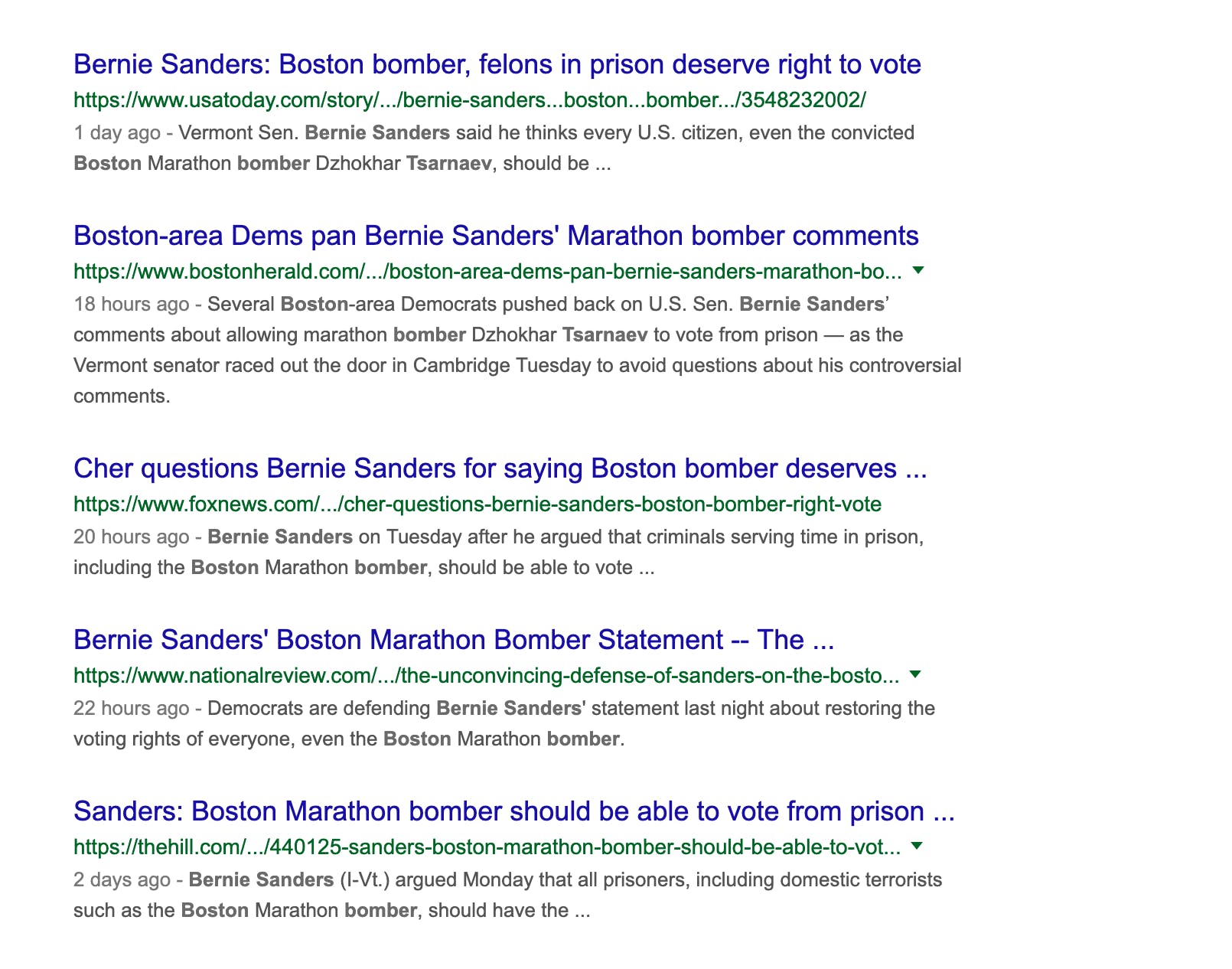 Which he did. Absolutely.

And that shouldn’t matter. If you are afraid of the views of one person exercising their voice in democracy, you don’t believe in democracy. If you think the voice of one person who committed an act of terrorism is too dangerous to participate in our system, you don’t have any faith in this system.

Just when you thought it couldn’t get worse….@BernieSanders supports allowing rapists, murderers, and terrorists – like the Boston bomber and Dylan Roof, the individual who massacred 9 church-goers in Charleston, to vote from prison. https://t.co/1wd8EBJHiS

But that isn’t what this debate is really about.

It’s easy to say Tsarnaev shouldn’t have the right to vote, and use him as a blanket way to shut down debate, especially when engaging with the issue means actually confronting the reason the incarcerated don’t have a right to vote: which was as a way to strip Black people of their voting power.

What Sanders was doing was challenging laws that were passed in the wake of the Civil War and have barely been revisited since.

What he was doing was arguing for fundamental change. And all people could do was say he wanted a terrorist to vote Democrat.

Bernie Sanders believes terrorists like the Boston Marathon bomber, rapists, and murders should be able to vote from jail.

Lots of people who have done odious things—greedy corporate bankers; executives who denied the links between tobacco and cancer, or fossil fuels and climate change; people who committed crimes and weren’t charged—are allowed the right to vote.

Their rights are protected, in ways that people who have been convicted of crimes—unfairly, incorrectly, accidentally by racist judges and juries, and by an America justice system designed for centuries to target African Americans—aren’t.

It’s extremely simple to point the most egregious example as a way to justify your own positions without giving them rationally nuanced thought. It’s much harder to speak up for the people the government says shouldn’t get to have a say. The debate about letting incarcerated people vote has extremely little to do with Dzokhar Tsarnaev. People are just making it about him because they don’t want to have the debate at all.