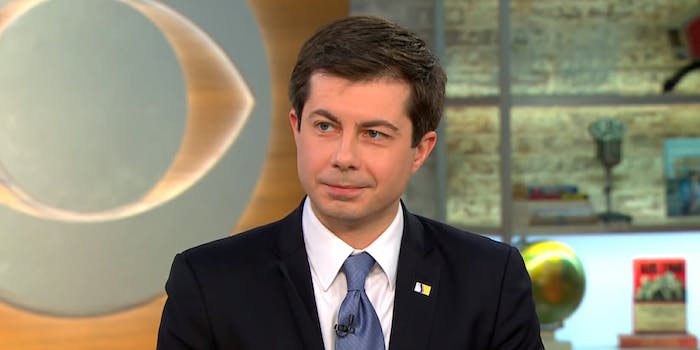 A Harvard student posed the question to Sanders, asking whether those incarcerated—including the likes of the Boston Marathon bomber and those convicted of sexual assault—should be able to vote.

“Yes, even for terrible people because once you start chipping away,” he said, “you’re running down a slippery slope. So I believe that [when] people commit crimes they pay the price, when they got out of jail they certainly should have the right to vote. But I do believe that even if they are in jail, they’re paying their price to society but that should not take away their inherent American right to participate in our democracy.”

Buttigieg had a different response.

“No, I don’t think so,” he said firmly after being asked his insight on Sanders’ response. His response was met with a round of applause by the guests. “I do believe when you are out, when you have served your sentence, then part of being restored to society is you’re part of the political life of this nation again and one of the things that needs to be restored is your right to vote.”

He went on to explain that voting is one of the rights you lose as “part of the punishment” for your crime.

Buttigeig: People should not be able to vote while incarcerated
Woman in right: 🥴#CNNTownHall pic.twitter.com/feBbC5UUHJ

If incarcerated individuals shouldn’t vote, then their labor shouldn’t be exploited by major corporations/entities for what amounts to pennies either.

If you care whatsoever about democracy, you should believe in UNIVERSAL suffrage. Democracy doesn’t mean that some bullshit moral test is a prerequisite to being allowed a vote. Don’t trust a single “progressive” who wants to continue to deny incarcerated people that right.

In fact, it was a dealbreaker for some users.

I’m not sure who I’ll be supporting in the primary yet, but @PeteButtigieg lost my vote with this. There’s no good reason not to let incarcerated folks vote. It’s a policy rooted in racism & white supremacy. https://t.co/LF6GyqtSoK

Some pointed out the important nuances of the question—while the Boston Marathon bomber is convicted of a heinous crime, he is hardly reflective of the greater prison population of America, where mainly people of color and people from low socio-economic backgrounds are likely to be imprisoned.

This moment shows the importance of framing. "Should the Boston Bomber be allowed to vote from prison?" is a much different question than "Should incarcerated Americans have their voting rights restored?" https://t.co/BaIRcGpyVI

So incarcerated people having the right to vote isn't about "terrible people" voting.

It's about whether you believe people who are disproportionately oppressed by an unjust system still deserve to elect their representative. I think yes.

I don't think anyone would suggest that the Boston Bomber should vote while incarcerated. The problem is that the prison system has a foundation built off of deeply rooted racial bias where there are statistically disproportionate arrests & sentences for people of color.

Race, social class, and gender are important while discussing the prison population because they influence key factors like one’s access to legal services.

Real talk. Fuck Pete Buttgieg and anyone else who says incarcerated shouldn’t be able to vote. This only further disenfranchises black and brown ppl targeted by the industrial prison system. https://t.co/aVoNn9sjz1

When Buttigieg responded that prisoners should be denied the right to vote, I couldn't help but think of the queer and trans people, many of color, who were incarcerated so that he could have the career and the freedom that he has now. #CNNTownHall

I don’t expect to vote for a candidate with whom I 100% agree on everything. But this is a signal that Buttigieg doesn’t really understand the dynamics of race, incarceration, white supremacy, & participation in our democracy. That’s disqualifying.

Incarcerated felons losing their voting rights isn't a punishment meant to be a deterrent as Mayor Pete suggested tonight in his town hall. People don't stay out of jail so they can vote. Their votes stripped from them as a vestige of slavery and Jim Crow to keep white power.

This is from the CNN town hall last night. A Democrat candidate for president, Pete Buttigieg, was asked if people incarcerated should have the right to vote and he answered no. There's racist history in Buttigieg's past (firing a black police chief after bring racist…

Yoooo fuck everyone in that @cnn town hall applauding when @PeteButtigieg said incarcerated folks shouldn’t be able to vote. This is racism, plain and simple.