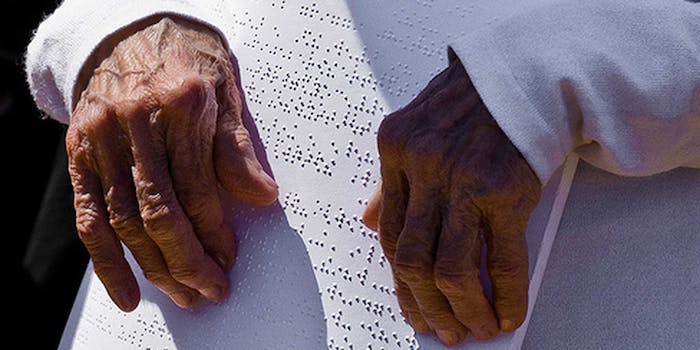 With a critical international treaty in support of the blind on the line, thousands of visually impaired Americans are turning to the White House’s We the People petition site to put political pressure on the president.

The only problem is, sightless would-be petitioners are finding it impossible to actually sign the petition due to a common flaw in CAPTCHA technology that makes it virtually impossible for blind people to access the site without assistance.

“This is the platform the White House has set up to engage with its citizens, yet it’s completely inaccessible for people who can’t see,” said Chris Danielsen, a spokesperson for the National Federation of the Blind, which is challenging the White House to modify its petition platform.

The NFB’s complaint is with the captcha function of the We the People site, specifically its audio option for the visually impaired. Similar to its visual counterpart, audio captcha ask users to decipher a series of obscured letters and numbers that are designed to fool a computer. But the audio distortion is so bad that it’s virtually impossible to make out the letters and numbers that are supposed to be entered for verification.

Captcha must be entered to create an account on We the People and to sign any petitions. Recently, the NFB started a petition in support of an international treaty that would allow libraries and schools that serve the blind to republish any book in an accessible format for visually impaired readers without regard to copyright. The treaty would also allow these materials to be shared across borders. It’s already the law of the land in the U.S. and 56 other countries, but supporters of the treaty hope to extend this right to all the 300 million blind people around the globe.

Danielsen said his group hopes to gain 100,000 signatures before a critical treaty conference in Morocco next month. That’s the number of signatures they need to force the White House to give their position on the issue. The White House has been silent on the issue for months, with treaty opposition from publishers and patent owners mounting.

But in the week since launching the petition, it’s gained just under 8,000 signatures. With 50,000 members in the NFB alone, Danielsen believes that indecipherable captcha is suppressing support.

“Understanding that not all of our members are going to sign the petition, that number still seems very low to me,” Danielsen said.

According to Politico, “The White House says the website is fully compliant with Section 508 of the Rehabilitation Act, which requires that federal websites be accessible to people with disabilities, and it says it is looking into improving the site.”

But We the People is hardly the first website to come under fire for inaccessibility. In a study of 16 job-searching websites last year, professor Jonathan Lazar of Towson University found that blind applicants required assistance more than two-thirds of the time.

Earlier this year the NFB, along with the National Association of the Deaf, won settlements from Target and Netflix after federal judges ruled that websites were not beyond the scope of the 1990 Americans With Disabilities Act. Other websites, like Monster.com, eBay, Travelocity and Ticketmaster, have all worked with NFB voluntarily to make their sites more user friendly to the visually impaired.

Danielsen said there are a lot of better audio captcha options out there, including ones that simply ask users to perform a math equation and thus don’t rely on audio distortion.

“It’s not something that’s impossible,” he said. “This is something companies should keep in mind when building their sites.”