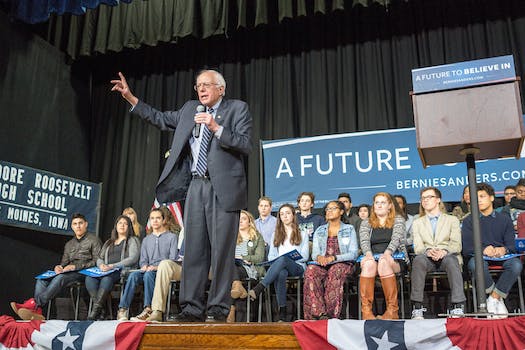 Bernie Sanders will lay off ‘hundreds’ of campaign workers

Sanders still plans to 'win as many delegates as we can.'

Bernie Sanders‘s presidential campaign isn’t over yet, but the end many be in sight.

The independent Vermont senator and insurgent Democratic challenger to former Secretary of State Hillary Clinton told the New York Times on Wednesday that he plans to lay off “hundreds” of workers in states around the U.S.

The reduction in campaign staff follows Sanders’s losses in four out of five of Tuesday night’s state primaries. The victories by Clinton, who went into Tuesday with a significant delegate lead over Sanders, means Sanders would have to win 82 percent of all available delegates or 103 percent of all pledged delegates to secure the party’s nomination.

Sanders said his staff layoffs will focus on states that have already held primaries, while the campaign will continue to focus on the 14 remaining states and territories that have yet to vote.

“We want to win as many delegates as we can, so we do not need workers now in states around the country,” Sanders told the Times. “We don’t need people right now in Connecticut. That election is over. We don’t need them in Maryland. So what we are going to do is allocate our resources to the 14 contests that remain, and that means that we are going to be cutting back on staff.”

Sanders added that his “very large staff” was built to handle “50 states in this country.” With improbable chances at winning the delegate race, Sanders no longer needs a countrywide operation.

The dire odds for the Sanders campaign have not reduced the 74-year-old senator’s appreciation for those who helped him achieve far more success against the Clinton political powerhouse than many assumed he would.

And he’s still not throwing in the towel.

“If we win this, every one of those great people who have helped us get this far, they will be rehired,” Sanders said. “But right now, we have to use all of the resources we have and focus them on the remaining states.”