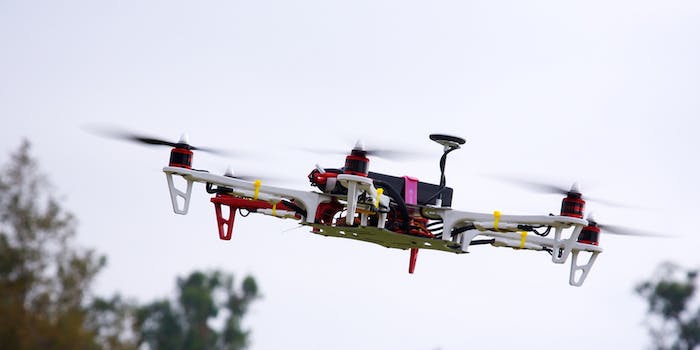 Relax, you can now buy an anti-drone detection system

When it comes to drones, you can never be too careful.

For those who see drones as something to fear, there’s now a Kickstarter campaign that could help keep these flying robots at bay.

A company called Domestic Drone Countermeasures(DDC) has created a drone detection system that it claims will allow users to track drones in their immediate area with a simple WiFi connection.

The product uses a combination of transmitter detection and motion detection to find unmanned flying objects lingering around your home, meaning it will be able to discern a drone from an unsuspecting bird. Users will be able to control the system through an interface that will be available for computers, smartphones, and tablets. If a drone is detected, users will receive an alert, and an alarm will sound. As more people use the system, the detection fields combine to maximize drone detection.

So far, the Oregon-based company has raised just under $900 from 15 backers—far shy of their $8,500 goal, which must be met by July 15 for DDC to receive any pledged funds. The donations received will go toward developing prototypes of the protection system, DDC says, with the goal of creating a reliable and affordable drone detection system for consumers.

Since they’re still a relatively new technology, drone laws in the U.S. remain ambiguous, and it will take the government a few years to solidify how drones can and cannot be used. The Federal Aviation Administration (FAA) has acted against drones for commercial use, though they still grant exceptions. Personal use of drones are allowed, as long as the drones do not reach heights exceeding 400 feet, remain within sight of the operator, and aren’t flown near airports.

Drones are easy to find and purchase for personal use, but they yet to achieve widespread adoption. While there’s been a fair share of drone foibles, DDC has acted with the notion that the machines are here to watch and record our every move. It’s not a farfetched notion, but the product will most likely be more useful to the public arena before it becomes a fixture in our private lives—at least for now.