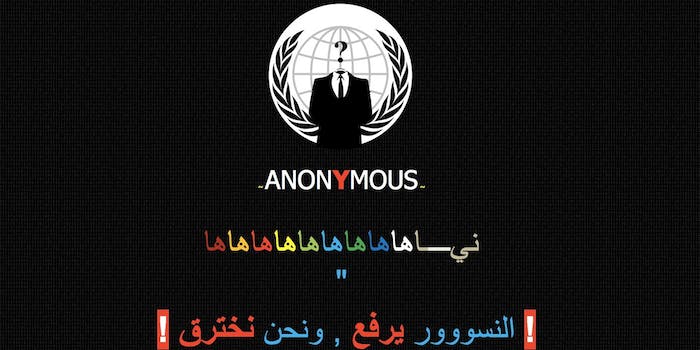 The hacker group left a message on Abdullah Ensour's website, registering its displeasure over fuel and electronics taxes.

The Jordanian affiliate of the hacktivist collective Anonymous has knocked the website for the country’s prime minister offline in protest of a series of price hikes set to affect Jordan.

Anonymous Jordan defaced the website, and left a message in Arabic for the prime minister, Abdullah Ensour, saying, “Hi uncle, how are you? We are sorry, we hacked your website. Are you upset? We feel much worse when you raise prices. The people know this feeling but you do not.”

In an attempt to reduce a $2 billion deficit and manage $23 billion in foreign debt, the Jordanian government has announced an austerity plan. Among the measures are a doubling of taxes on cell phone hardware and mobile contracts. Electricity costs are to rise by 15 percent and taxes on imported clothing by 15 percent to 20 percent.

A rise by as much of 53 percent in fuel prices, which included natural gas, used in home heating and cooking, inspired national protests last November—protests which occasionally turned violent.

Jordan’s information minister, Mohammad Momani, told the AFP that his department restored the website several hours after it was hacked.

“The authorities have identified the attackers. Legal action will be taken against them,” he said without elaborating.