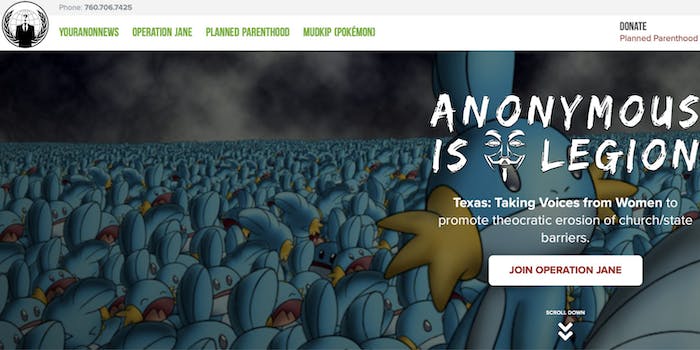 The hacking group also put up a donation link to Planned Parenthood.

The Republican Party of Texas’ official website appeared to be hacked by Anonymous on Saturday morning. The website was later taken down.

After Texas’ restrictive abortion law went into effect on Sept. 1, Anonymous launched Operation Jane, an initiative targeting anyone attempting to enforce the law. The group followed through on its mission by hacking the Texas GOP website.

The homepage on texasgop.org showed “ANONYMOUS IS LEGION.” Under it, it says: “Texas: Taking Voices from Women to promote theocratic erosion of church/state barriers.” The website was complete with a donation link to Planned Parenthood. The website’s menu was changed from its typical sections to “YourAnonNews,” “Operation Jane,” “Planned Parenthood,” and “Mudkip (Pokemon).”

In a statement to the Daily Dot, Texas GOP Chairman Matt Rinaldi said the organization would be increasing security on the site.

“Pro-abortion hackers changed our web page for a short time before we took it down. We will be increasing security and appreciate the hackers providing us with a fundraising opportunity—funds we will use to promote even more robust Pro-Life legislation in Texas,” Rinaldi said.

Anonymous is known to hack websites to make statements in support of its beliefs. As a part of Operation Jane, the organization also urged Twitter users to spike traffic to the Texas Right to Life website in order to thwart its performance.