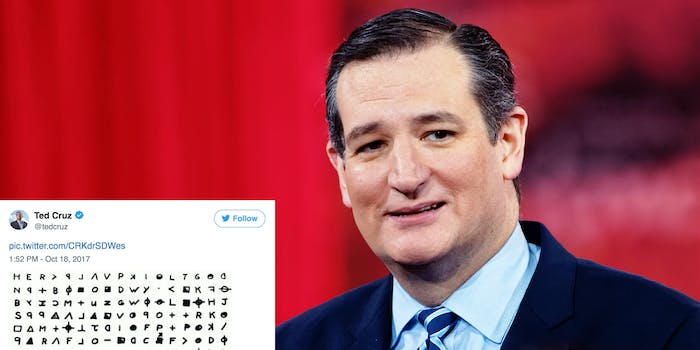 Well, this is suspicious.

Is Sen. Ted Cruz the Zodiac Killer? No—but his latest tweet has us concerned.

While Cruz has never specifically denied being the infamous mass murderer, the Texas Republican on Wednesday fueled speculation by tweeting out an image of the cryptogram the Zodiac Killer sent to the San Francisco Chronicle in 1969.

It all started when Sasse spilled a soda on Cruz in the Senate today.

If I were sitting with the son of the guy who killed Kennedy I might do worse than spill some Dr Pepper.

full disclosure:
i was wearing my "Lee Harvey Oswald Was Framed" t-shirt https://t.co/93lKIizkVO

The Zodiac Killer was a serial killer who claimed to have murdered dozens of victims in California during the 1960s and 1970s. His identity was never discovered. Speculation that Cruz is the Zodiac Killer—an impossibility given that he was born after the murdering spree began—has been a meme for years. Some even believe Google attempted to cover up the wild rumor by tweaking its search suggestions for “Ted Cruz” and others joked that CNN dropped proof of his “real” identity when the senator dropped out of the 2016 Republican presidential primary in May 2016.

Others have taken the joke so far as to print “Ted Cruz was the Zodiac Killer” T-shirts to raise funds for abortion services—something the conservative lawmaker staunchly opposes.

Alas, Cruz is not the Zodiac Killer—but he clearly isn’t doing anything to help that old joke die.