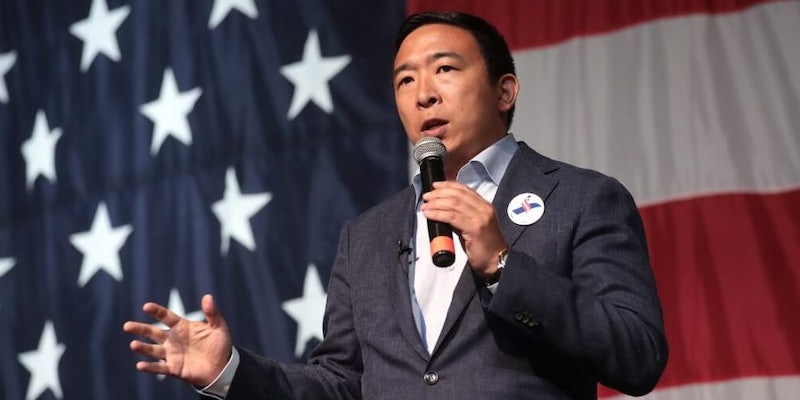 The Yang Gang is fired up.

In a leaked letter sent to DNC Chairman Tom Perez on Dec. 21, which was first obtained by the Daily Beast, Yang asks the DNC to take the exceptional measure of commissioning four more polls in early-voting states to determine which candidates qualify for the Jan. 14 debate in Iowa. He believes this will foster more diversity on the debate stage.

“With the upcoming holidays and meager number of polls currently out in the field, a diverse set of candidates might be absent from the stage in Des Moines for reasons out of anyone’s control,” Yang reportedly wrote. “This is a troubling prospect for our party. Regardless of the DNC’s best intentions, voters would cry foul and could even make unfounded claims of bias and prejudice.”

Like Yang, Sen. Cory Booker (D-N.J.) has met the fundraising thresholds, but not the polling threshold. Yang has polled high enough to take the stage in one poll but needs three more to qualify.

In the letter, Yang referenced the fact that it’s been over a month since the last poll was conducted in early voting states Iowa, New Hampshire, Nevada, and South Carolina. “As you know, big shifts can happen within short periods in this race, as we’ve already witnessed multiple times,” he wrote.

He added that additional polling “would provide an accurate snapshot of the current state of the race and where voters’ hearts and minds are, thus getting ahead of an imminent problem.”

After the story broke, Yang echoed this concern on Twitter.

The Daily Beast reports that a DNC official pointed to the 26 qualifying polls that have already been done, and noted that the qualifying window for the next debate was a week longer to account for the holidays.

The DNC has not commented further since the story went live. It currently appears as though Yang’s request will not be fulfilled.

Nevertheless, the “Yang Gang” was out in full force supporting their candidate on social media. To some, the dispute harked back to accusations that the DNC intentionally hindered Sen. Bernie Sanders’ (I-Vt.) 2016 presidential campaign.

On the Yang for President HQ Reddit page, supporters expressed their frustration over the news. “Why do they have to bow to [Sen. Amy Klobuchar (D-Minn.)] but Andrew has to ask to get poll? This is so infuriating,” one redditor wrote. Another responded, “DNC and media control of the nomination. Easy answer, YangFriend.”

On Twitter, Yang supporters answered the call to use the hashtag #PollthePeople. An hour after Yang’s tweet, more than 4,000 tweets included the hashtag and it was trending nationally.

Come on DNC, do you really want to have an all white debate without any POC. So much for the party of diversity.
#yanggang#yang2020 #PollThePeople https://t.co/5Xw2hxOuk1