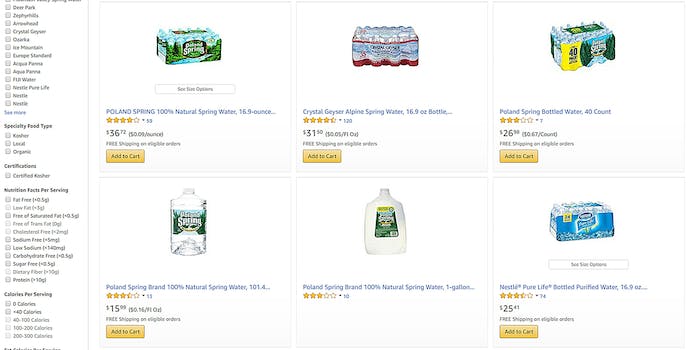 Amazon has been accused of inflating the prices of essential items in areas where Hurricane Irma is forecast to hit, and people are outraged. But the company may not be as guilty as some are making them out to be.

Grocery stores in Florida are quickly selling out of goods as residents stock up supplies days before the powerful storm makes its way to the coast. Some residents were forced to go online and hope their orders arrive before the weekend.

But Floridians trying to order necessities like bottled water from Amazon were left angered by shocking prices. Prices of water reached as high as $100 for a 24-pack and $40 for a single 16.9-ounce bottle, according to screenshots uploaded to Twitter.

shame on @amazon for price gouging/allowing price gouging on life-sustaining necessities like water. #Irma $18 a case?!

But Amazon is taxing on water. This gotta be illegal. pic.twitter.com/hpkCV8GUKJ

It’s not clear what’s causing the prices to increase, but it’s important to note that many culprits appear to be third-party sellers. Still, products sold by Amazon have also been spotted with giant price tags. But Amazon claimed in a statement to the Daily Dot that it does not engage in “surge pricing” and that its prices haven’t widely fluctuated in the past month.

The reason a 24-pack of water costs $100 likely has more to do with supply—sellers who sold at a reasonable price have already run out, leaving only the most expensive options. It’s not clear if third-party sellers are increasing their prices because of Irma.

Several people, including Deadspin editor Diana Moskovitz, have also complained about inflated shipping prices, but it’s important to note the details in these screengrabs. As you can see, Moskovitz appears to be buying through a company called “Prime Central Store,” not directly through Amazon. The seller, who doesn’t offer Prime (but does offer customers free standard shipping), could be shipping a 24-bottle package of water from anywhere in America. A quick shipping estimate shows the price of a 28-pound package of water could easily spike to above $100 if shipped in two days from the other side of the country. Other screengrabs also show water being sold from third-party sellers that don’t offer Prime.

$122 for shipping? F U @amazon pic.twitter.com/uLuHidFLUG

Price gouging is illegal under Florida law, as the Miami Herald points out. While Amazon isn’t based in Florida, Attorney General Pam Bondi spokesman Whitney Ray told the Herald, “If a business is selling an essential commodity to persons who are using it in Florida as a result of the emergency, the business may be subject to Florida’s price-gouging law.”

Clarification: The high prices for bottled water and shipping are the result of third-party sellers, not Amazon itself. Amazon tells the Daily Dot it does not engage in “surge pricing.” We have updated the headline to reflect new information.