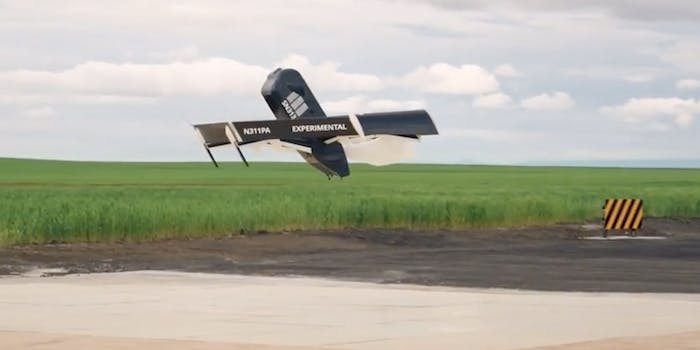 Drones could soon be delivering your Amazon Prime packages

The drones could be flying out in just a few short months.

Drones could be delivering Amazon Prime packages to your door in just a few short months with its Prime Air project. Amazon unveiled the type of drone that will be used at a conference in Las Vegas on Wednesday.

Amazon also got Federal Aviation Administration (FAA) approval to fly the drones on the same day.

The company claims that the drones could bring delivery times down to just 30 minutes.

“You’re going to see it delivering packages to customers in a matter of months,” Wilke said at the conference.

Test-flight footage released by Amazon on YouTube shows the drone during takeoff, flight, and landing.

The hybrid design combines capabilities from both airplanes and helicopters by allowing for vertical takeoffs and landings, as well as continuous forward flight.

Wilke also emphasized the drone’s new safety features, which includes cameras and detect hazards. Artificial intelligence will be utilized to recognize hazards like humans and animals and even much less visible obstructions such as wires.

“A customer’s yard may have clotheslines, telephone wires, or electrical wires. Wire detection is one of the hardest challenges for low-altitude flights,” Wilke said at the conference. “Through the use of computer-vision techniques we’ve invented, our drones can recognize and avoid wires as they descend into, and ascend out of, a customer’s yard.”

The company says its goal is to have a finalized product capable of flying up to 15 miles and carrying packages under five pounds. While the weight requirement sounds restrictive, Amazon states that anywhere from 75% to 90% of its deliveries fall within that weight range.

“Our drones are safe, efficient, stable, and good for the environment,” Wilke added. “We know customers have high standards, so we set a high bar for Prime Air. And we’re excited to be nearing our goal.”

Amazon has not yet revealed where Prime Air would be available or how many drones would be in use.