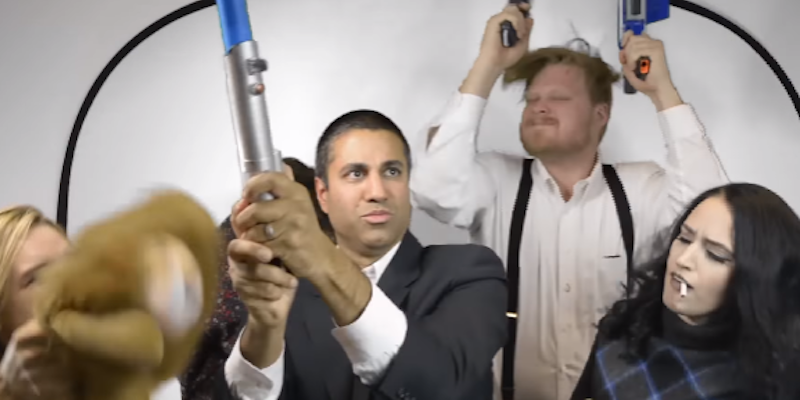 Ajit Pai’s anti-net neutrality YouTube video got pulled down, but now it’s back

The FCC this week voted 3-2 to undo the Obama administration’s net neutrality rules, in what was seen as a massive victory for the telecom industry. Just one day prior to the vote, as if to preemptively rub a little salt into the wound of net neutrality supporters, FCC Chairman Ajit Pai starred in a snarky anti-net neutrality video produced by conservative website the Daily Caller.

But that video was subsequently pulled down from YouTube on Friday for a period of about seven hours, leaving people wondering what happened.

For anyone who hasn’t already seen the video, it shows Pai listing seven things he says people will still be able to do in the absence of net neutrality, which he characterizes as his “plan to restore internet freedom.” The list includes taking photos of food, selfies with pets, and ordering Christmas gifts online, complete with a Santa-clad Pai holding a fidget spinner.

As for what happened to the video, it was briefly pulled down by way of a copyright claim by Harry Rodrigues, aka Baauer, the DJ behind the Harlem Shake, which was used in the video. Baauer reacted with outrage on Twitter when he learned the video had used his music, and he promised to do whatever he could to “stop this loser,” referring to Pai.

I'm Taking action. Whatever I can do to stop this loser https://t.co/Ajo6wBATdF

Now, however, it’s back online. As the Verge detailed on Sunday, the Daily Caller is criticizing the attempt to have it removed, claiming the video qualifies as parody and is, therefore, a clear-cut case of fair use.

Even though the video has been restored to YouTube, it’s clear from its like/dislike ratio that the internet at large isn’t fond of it. As of the time of this writing, it’s been disliked approximately 198,000 times, compared to just 7,000 likes.

The video has also been a topic of controversy beyond its stated subject matter. In the portion in which Pai dances to the Harlem Shake, with a lightsaber hilt in hand, one of the women dancing alongside him is Martina Markota. A video producer for the Daily Caller, Markota, according to the Hill, was at one time a proponent of the far-right fixation known as Pizzagate, a discredited conspiracy theory which ultimately led a gunman to fire a bullet inside a Washington, D.C. pizzeria last year.

Markota has since removed the video in which she reportedly discussed Pizzagate, and she denies believing in the theory, accusing Gizmodo’s reporters of lacking “reading comprehension.”