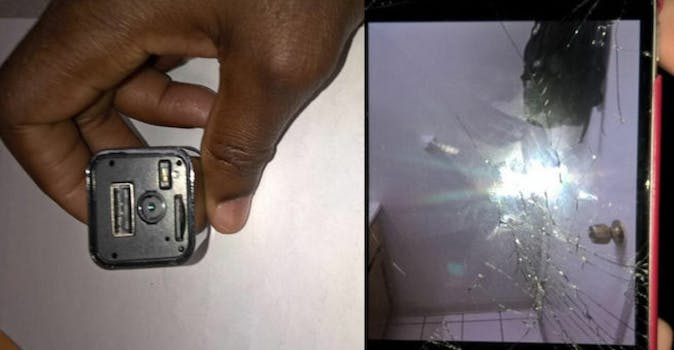 He reportedly disguised the cams as phone chargers.

Another Airbnb user was caught using hidden cameras to spy on people, serving as another reminder of the risks associated with peer-to-peer services.

The person allegedly disguised cameras as cell phone chargers and planted them in a restroom where they could view the host or other guests using the toilet or taking a shower. Police say the cameras were equipped with “remote-viewing capability,” or the ability to stream a live feed to a smartphone or laptop. The apartment host who discovered the devices told police she noticed her guest was running Cambush, an app that records video, on his iPhone. She also told police that the man asked her and her roommate about their bathroom habits, including when they typically use the restroom, according to NBC New York.

The guest who was renting the space, 44-year-old Rob Rothman, was arrested and charged with unlawful surveillance. This latest incident is the first we’ve seen that involves a guest tampering with an apartment to spy on its host or other guests.

However, it isn’t the first time an Airbnb user was caught snooping. In October, 56-year-old host Wayne Natt was arrested and charged with video voyeurism after an Indiana couple discovered hidden spy cams used to record “sexual activity.” And on Nov. 27, Jason Scott of the Internet Archive posted a photo of a hidden cam his colleague found at the Airbnb they were staying in.

While it’s both against the rental site’s rules and illegal to spy on people, it’s not surprising when it does happen. The gig, or sharing, economy is grounded on the assumption that ordinary people can be trusted to follow the rules and treat others with respect. But time and again, that premise falls short. With multiple sexual assault allegations against Uber drivers and an Airbnb guest allegedly murdered by three hosts, the risk of trusting strangers can’t be understated, and no set of rules or background checks will protect everyone.

If you do choose to use a platform like Airbnb or Uber, learn as much as you can about the people providing the service and always read reviews.

We have reached out to Airbnb regarding this latest incident and will update this article if we heard back.

Update 11:30am CT, Dec. 7: A spokesperson at Airbnb confirmed the report in a statement to the Daily Dot. The company says it’s now working with the police in its investigation and has permanently banned Rothman from its platform.

“Airbnb takes privacy extremely seriously and there is absolutely no place in our community for this kind of illegal and outrageous behavior. The individual involved has been permanently banned from our community and we have reached out to law enforcement to offer our assistance with their investigation. We hope justice will be served quickly. Cameras are never allowed in bathrooms or bedrooms and any other camera must be disclosed ahead of time.”