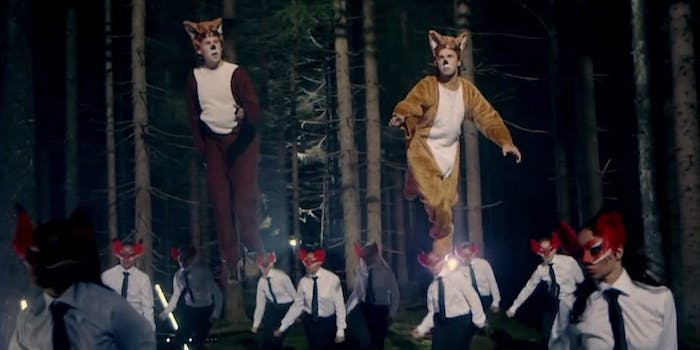 The bizarre history of ‘The Fox (What Does the Fox Say?)’

What does the fox say? If you’ve been vaguely online in the past five years, you probably know the answer in the form of a catchy, annoying, beloved refrain.

“The Fox (What Does the Fox Say?)” by Ylvis was released in September 2013, and it’s become one of the most beloved gimmick songs of the past half-decade. The video has more than 685 million page views and still counting, and though the song was originally a gag, it took on a real life of its own soon.

The popularity of the video surprised Ylvis, the Norwegian comedy duo of Vegard and Bård Ylvisåker. They didn’t expect to make such a huge viral hit, but once their goofy video unexpectedly propelled them into the spotlight, they certainly seemed to enjoy the ride.

18 curious facts about “What Does the Fox Say?”

The Ylvisåker brothers are a comedy duo from Norway, and the original idea for creating the track and the video was simply to promote the brothers’ third season of their talk show, I Kveld Med Ylvis (Tonight With Ylvis). Instead, the brothers got a little more than they expected.

“We’re not chasing the next hit,” Bård told Entertainment Weekly in 2013. “We’re just making stuff that we think is funny. Some [videos] will get like 100,000 views and some obviously got 100 million, but it’s the same recipe. It’s supposed to be three minutes for a Norwegian talk show and this one traveled.”

2) Both brothers have a musical background

The two spent part of their boyhoods in Mozambique and Angola, and according to Bård, they were so socially awkward when they returned to their native Norway that “we almost became those douches who pull out the guitar by the campfire,” he said, via the Star. Vegard also learned how to play the double bass, while Bård studied the violin. “Our parents were always really fond of music and they encouraged us to do whatever we wanted to do. We went to choir and stuff when we were kids,” Bård told Entertainment Weekly. According to Vegard, the songs were never meant to be taken seriously, even in their younger years. “We sang continuously, we made small music things in our room,” Vegard said. “But it was always with a comic context. We always hide behind that. We’re too much of cowards to actually mean something.”

3) Monty Python was a big influence for Ylvis

When the family moved to Africa, Vegard said they only had two comedy videos that the brothers could look to for inspiration: Monty Python’s Life of Brian and a Norwegian variety comedian. “We developed humor that was a mix between those two,” Vegard said.

4) Ylvis had some high-powered help to produce the song

Stargate is a Grammy award-winning record production and writing team that’s worked with Beyoncé, Rihanna, and Katy Perry. After Ylvis made a mockumentary for Stargate co-founder Mikkel Storleer Eriksen’s 40th birthday, Stargate worked with the Ylvisåker brothers to record“The Fox (What Does the Fox Say?).” Tor Erik Hermansen, Stargate’s other co-founder, sent Ylvis a few options for a possible track. The brothers soon entered Jay-Z’s Roc the Mic studio with the lyrics ready to go. “I just thought it was a joke,” Hermansen told Spin. “The whole thing was completely for fun. I had no idea that it was going to have this type of appeal. It was just a joke. I couldn’t have predicted this at all.”

5) The song was supposed to be a joke, but not in the way you think

The idea for“The Fox (What Does the Fox Say?)” was for it not to be hit. Instead, the brothers were going to use the footage of the song on their show in Norway to prove what absolute failures they were in the music business. They were going for a comedic element, and they wanted to misuse Stargate’s talent to turn their opportunity into a disaster. “To have that opportunity and come back to the show and say to the audience, ‘Sorry guys, we had the chance, we couldn’t find anything else than what sound the fox says— we blew the opportunity,’” Vegard said, via MTV.com. “And then it sort of backfired on us.”

Though Psy’s “Gangnam Style” hit as high as No. 2 on the Billboard chart with a video that’s been viewed billions of times,“The Fox (What Does the Fox Say?)” hit 100 million views on YouTube in just 35 days. As the Wall Street Journal notes, it took “Gangnam Style” 51 days to reach that mark. But then again, Psy’s “Gentleman,” the follow-up to his first massive hit, eclipsed 100 million views in only four days.

Um, no. “To be honest I am quite surprised,” Bård told Mother Jones soon after the song was released. “This song is made for a TV show and is supposed to entertain a few Norwegians for three minutes—and that’s all. It was done just a few days ago and we recently had a screening in our office. About 10 people watched—nobody laughed.” A couple months later, he told the Toronto Sun, “I think our lives will forever be defined as before and after the song now.”

As for how he would describe The Fox, Bård had no illusions about the quality of the brothers’ work. “It’s such a stupid thing, The Fox thing,” he told Spin. “Even though people find it interesting, it’s still a stupid fox song, and when people start to get over this, it gets even worse, because it is so stupid. So it potentially could be kind of bad for us, I think.”

His name is Bernhard Ramstad, and this is what he was doing in the video.

Those outside of Norway probably don’t know who Ramstad is, but he’s had a long career in Norwegian films and TV, beginning in 1974. He’s also voiced over plenty of animated films that were translated into Norwegian, including voices for the Great Gonzo in A Muppet Christmas Carol, Cornelius in A Bug’s Life, and Lawrence III in Pokemon 2000.

Why is Vegard wearing a squirrel costume and Bård a bear costume? Why is neither brother dressed like a fox? Apparently, Ylvis hired somebody to make the costumes for the video, but it never came to fruition. Then, the day before the video shoot, they tried to rent costumes from the Norwegian Film Institute. But the institute didn’t actually own any fox costumes. So, a bear and a squirrel costume were the next best options. “At first, we thought, ‘This is crap’ and this looks silly and suddenly we thought maybe this isn’t a stupid idea and maybe the silliness would add to it,” Vegard told the Daily Beast.

The brother told ABC News the noises were simply improvised once they were inside the recording studio. Vegard said they had less than an hour to finish the vocals and the brothers were “just doing our best … just totally nailing it.” They both agreed that the “tchoff-tchoff” was the closest one to the truth.

13) But what does the fox actually say?

Busch Gardens in Williamsburg, Virginia has done its best to answer this for us (and for Ylvis).

Turns out, foxes can scream. As Popular Science points out, “Foxes aren’t quite as varied in their vocalizations as dogs, but they’re still capable of making lots of different sounds. … Fox vocalizations are higher-pitched than dog vocalizations, partly because foxes are much smaller. The barks are a sort of ow-wow-wow-wow, but very high-pitched, almost yippy. It’s commonly mistaken for an owl hooting.” Here are two more examples for your listening pleasure.

14) Ylvis had no idea about furries

Is Ylvis a fan of furries, especially considering the brothers spend much of the video in animal costumes? Vegard pleaded ignorance, saying he didn’t previously know anything about the furry community. “Their reactions were mixed,” Vegard told What’s Trending in 2013. “[Some said], ‘This is insulting to us furries.’ I don’t think it is, because I didn’t know furries existed.”

15)“The Fox (What Does the Fox Say?)” inspired a New York Times bestselling book

Only two months after the song went viral, publisher Simon & Schuster published a children’s book called What Does the Fox Say? that was based on Ylvis’ tune. But actually, the brothers came up with the idea for a book before the song became famous. “We thought it would be funny to have a really well-done book as merchandise for a tanked project,” Vegard told USA Today. “It’s just so stupid. But stupid dollars are the same as smart dollars.” The book sold out in a single day on Amazon, and it immediately became the best-selling children’s book that week. However, not everybody was impressed. As the Telegraph wrote, “At only 32 pages Henrik Ibsen can sleep easy in his grave as Norway’s greatest literary authority.”

16) Ylvis was impressed by the ‘SNL’ parody

Naturally, “The Fox” inspired a number of takeoffs and other copycat videos. Perhaps the most well known is Saturday Night Live’s “My Girl.”

The brothers said they thought the SNL skit was funny, but they were most impressed by the details of the background scenes.

“You see those bricks there? That’s what we really appreciate,” Bård told ABC News. “We’re very nerdy when it comes to television. They’ve replaced the bricks very authentically. These bricks very much look like the bricks in Norway.”

Here are the bricks shown in “The Fox” video:

And here was the background behind Jay Pharoah on SNL:

17) Here’s what the Fine Bros. discovered about “The Fox”

The Fine Bros made “The Fox” the focus of two videos: One in which teens react …

And one in which elderly people react.

Not to spoil the videos, but both generations of viewers, almost unanimously, quite enjoyed the song and video.

It’s funny, because it’s a song about a guy who’s completely obsessed with Stonehenge. It also eventually takes a quick detour into a song about Vegard getting oral sex from his wife.

It was released in 2011, and as of this writing, the video has garnered about 29 million views, only 656 million less than “The Fox.”