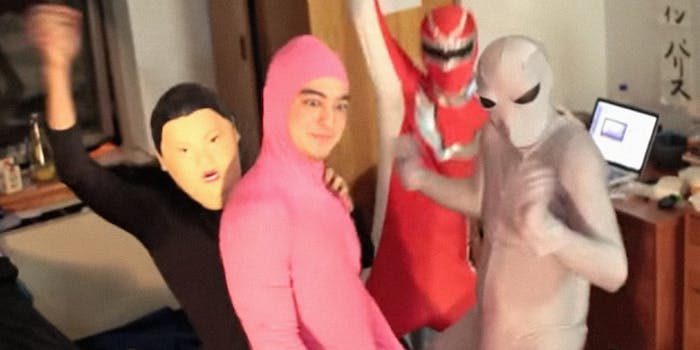 15 things you probably don’t know about the Harlem Shake

There is a connection, however slight, between the dance and the meme.

You already know what to do when you hear the beat for “Harlem Shake,” the 2012 Baauer hit that torched the internet in 2013. You stand disinterested as one person dances like no one’s watching. Then, about 15 seconds in, a voice commands “do the Harlem Shake” and the beat drops, and suddenly, it’s as if you’re in another dimension, and the room has been turned upside down. Everyone is going bonkers.

The Harlem Shake swept the internet in part because it was so easy to replicate. Anyone could quickly film and upload their own version, and it was a helluva lot of fun to do. At its peak in February 2013, well over 4,000 iterations of the dance were being uploaded to YouTube daily.

But while you might think you know about the Harlem Shake, the dance has its storied history, one that goes back decades and has little to do with viral hit.

15 fascinating facts about the Harlem Shake

It all started in Harlem, New York in 1981, when a man who called himself Al B (real name Albert Boyce) reportedly invented a dance that he originally called the “albee” at Rucker Park, a famed streetball basketball court in Harlem that gave rise to some of the greatest basketball players in history. Kareem Abdul-Jabbar, Kobe Bryant, Connie Hawkins, and Julius Erving all spent time at Rucker Park. As did Al B, who would dance at halftime of games to entertain the crowd. He died in 2006 at the age of 43.

2) Al B was inspired by ancient Egyptians

Al B told Inside Hoops in 2003, “It’s a drunken shake anyway, it’s an alcoholic shake, but it’s fantastic, everybody loves it and everybody appreciates it. And it’s glowing with glory. And it’s respected.” He continued: “It was a drunken dance, you know, from the mummies in the tombs. That’s what the mummies used to do. They was all wrapped up and taped up. So they couldn’t really move, all they could do was shake.”

3) But a teenage amateur comedian started the viral craze

Though the song came out in 2012, Filthy Frank, then a 19-year-old studying communications in New York, posted his dancing 30-second video on Jan. 30, 2013. Originally, the video was part of a compilation called “FILTHY COMPILATION #6—SMELL MY FINGERS.” Eventually, Filthy Frank posted the Harlem Shake portion, with the four costumed figures dancing bizarrely to the track, as a video by itself, and it changed the course of the meme’s history.

“As soon as the drop of the song came, we just started going crazy,” Filthy Frank told the Fader. “We thought, ‘Well, we could turn this in to something good.’ … I guess I’m proud [of starting the meme]. It’s a shame, that was probably the video I put the least amount of work into.”

Jayson Musson, a hip-hop artist who used to be affiliated with group Plastic Little, referenced the Harlem Shake in his 2001 song “Miller Time.” The track was inspired by a street fight he found himself in one day. Despite the fact both parties were bleeding, Musson claims he ended the fight by doing the Harlem Shake dance, which made for a helluva punchline: “And if you bring a 40 bottle to battle me/ I’ll just punch you in the face/then do the Harlem Shake” into “Miller Time.”

One of Jayson Musson’s hip-hop colleagues had to tell him about it. “I didn’t believe him at first because I had heard the song and never even thought twice about the vocal sample,” Musson told the Fader. “The only thing I found peculiar about the track was the use of the phrase ‘Harlem Shake’ itself. I was like, ‘Who the fuck is rapping about the Harlem Shake in 2012? That shit is so old.’”

Within 40 days, more than a billion people had viewed Harlem Shake-related content, according to Visible Measures, a new world record that bested Psy’s “Gangnam Style.”

In February 2013,  YouTube’s Kevin Allocca reported that there were over 12,000 “Harlem Shake” videos on YouTube, garnering more 44 million views. Some covers had more than 18 million views. As the Guardian pointed out, on Feb. 10, 2013—a week after the meme first appeared to take off—a Harlem Shake video was being uploaded to YouTube every 21.6 seconds.

7) The Harlem Shake is not just meant for solid ground

It’s also been performed in the air and under the water.

And in the water.

8) “Harlem Shake” became the first YouTube craze to hit no. 1

In mid-February, right as the Harlem Shake meme was reaching its peak, Billboard made a drastic change to the way its formula for determining track placement on its prestigious Billboard Hot 100 singles charts. For the first time, Billboard started incorporating YouTube views, a change that shot Baauer’s “Harlem Shake” straight to no. 1. (Without the change, the song would’ve only reached No. 15, based largely on iTunes sales.

7 things you didn’t know about the Sad Keanu meme

14 interesting facts about Rickrolling, the meme that’s never gonna give you up

9) Baauer didn’t make much money off the song

According to the New York Times, Baauer’s label, Mad Decent, tried “aggressively monetizing the videos that use his song,” but was mostly wasted effort. That’s because he used unlicensed samples from Musson and reggaetón artist Hector Delgado. “I didn’t clear the samples because I was in my fucking bedroom on Grand Street,” Baauer told Pitchfork in 2013. “I wasn’t going to think to call up [Delgado], I didn’t even know who it was who did that [sample]; I knew the Jayson Musson [sample]. So I found myself in that fucking pickle. Legal letters and shit. Ugh. Lawyers. So exposure-wise it was fantastic, but everything else…” Baauer did not respond to a Daily Dot Twitter message asking for an update on his financial success from the song.

10) People have gone to prison over the meme

In February 2013, a pair of Israeli soldiers was sent to military prison after posting their version of the Harlem Shake. One soldier was sentenced to 14 days in prison, and the commanding officer who approved the stunt was given a 21-day sentence and was stripped of his command.

In the Middle East, people used the Harlem Shake to challenge the censorship of their government. In Tunisia, students performed the Harlem Shake outside of the Ministry of Education after the country’s education minister called it“insult to educational message.” Likewise, a Harlem Shake protest was arranged outside the Muslim Brotherhood’s headquarters in Cairo after four students were arrested for doing the Harlem Shake, which local authorities decladed a “scanalous act”

The Nyack/Tappan Zee hockey team forfeited a playoff game after some players filmed a NSFW version of the Harlem Shake in a locker room.

Baaeur’s said he doesn’t want only to be remembered for the meme craze, and oftentimes during EDM shows, he’ll simply forgo playing his big hit. For instance, he didn’t play it during the Coachella festival in 2016. It just so happens that the band Matt and Kim were also at Coachella that year, and the duo just happens to have produced one of the best Harlem Shake versions in existence, a video that garnered more than 1.5 million views in less than two days.

For a brief period of time, when you googled “do the Harlem Shake,” the search giant would comply. After the page had loaded for a few seconds, the entire page would start to convulse, bouncing the search results across the screen. Alas, it’s no more, but this Google Chrome extension offers the next best thing.

15) Many in Harlem were actually offended by the meme

The Crazy Boyz, a four-man dance crew who watched Al B. perform at Rucker Park and then modified his dance for their own use in the late 1990s, also weren’t pleased with the newest version of the Harlem Shake. The main beef seems to be that the Harlem Shake meme was a dance, and what crew was trying to represent was a movement.  “They’re representing wrong,” Maurice Strayhorne (aka Motion) said on this Schlepp Films YouTube video. “In Harlem, when people dance, we take it seriously. It’s from the soul, the essence.”