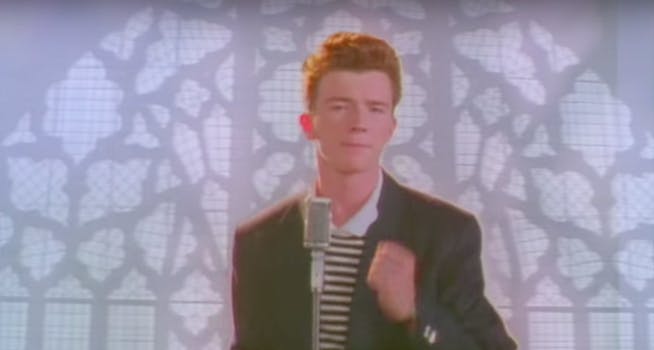 14 interesting facts about Rickrolling, the meme that’s never gonna you up

Rickrolling is a worldwide phenomenon, but there's a lot more to it than just a video.

Rickrolling. It’s the meme we will never be able to escape because it’s so bad that it’s good. And now it’s a decade old.

If you’ve been fortunate to have never been Rickrolled, this is how it works: Someone sends you a link—say to a new Beyonce video that just dropped—but then you are heartlessly greeted by the music video to Rick Astley’s classic pop hit “Never Gonna Give You Up.” because someone disgused the URL. (Click that link to Rickroll yourself right now.)

The first Rickrolling video came about 10 years ago today, on May 15, 2007, as a prank tied to a Grand Theft Auto IV trailer, only to catapult from its 4chan origins and become a mainstream internet sensation still popular to this day. So, in honor of that (and the fact that the song was released this year back in 1987—30 years ago), here are some things you might not have been aware of about “Never Gonna Give You Up” and some of the best examples of Rickrolling we’ve seen.

14 facts about the Rickroll

PopMalt Editor-in-Chief and NURV Creative Director Andrew Fischer created a video inspired by a question we’ve surely asked ourselves and others at least once: What if the internet was a real place? Well, that’s where The Chronicles Of Rick Roll comes in. The almost four-minute video features everyone from Antoine Dodson (of “Hide yo’ kids, hide yo’ wife” fame) to Gary Brolsma (“Numa Numa”) as they attempt to help two people that met through the internet, only to be somehow transported into an IRL World Wide Web. A lot is happening in the video but strangely even though its title includes the words “Rick Roll,” there’s no reference to the internet meme at all.

Maybe Fischer is saving that for the full-length movie he intends to release that’s based on this video, which, according to commenters, has been in the works for years (the video originally dropped in 2011). Until then, at least we have the trailer for The Chronicles Of Rick Roll.

Last year, EDM producer Calvin (not to be confused with Calvin Harris) created an EDM song that interpolates the Rick Astley classic. Titled “Give U Up,” the song features predictable lyrics like “You’re so dangerous to me / Russian roulette to me” and “I get up, I get up, I get up alone / And go back to bed without you in my arms.” But it’s when the chorus comes in that the song truly shines, because it’s the same chorus from “Never Gonna Give You Up.” But Calvin is a genius—if any song deserves to be reinterpreted as an EDM banger, it’s “Never Gonna Give You Up.” And, for what it’s worth, it’s an OK song. Like, seriously. Play it at a rooftop party this summer and watch your life become a Budweiser commercial.

But the best part of all of this, aside from it having an 85 percent approval rating and being viewed nearly 75,000 times? The comments. Here’s a sample:

“Jokes on you I still masturbated.”

The Register ran a story back in 2010 about an alliance of composers and songwriters’ performance rights societies led by Germany’s GEMA seeking a cease-and-desist order against YouTube. At the bottom of the article, it says that although Astley’s “Never Gonna Give You Up” had been streamed 39 million times on the video-streaming service, the artist had only received $12 for his performance share. Since Astley didn’t compose the song, he only receives a performer’s share of the sound recording copyright.

A year prior to that, Peter Waterman, who co-wrote the song, did an interview with The Telegraph, where he revealed that he only made $14 from YouTube for streams of “Never Gonna Give You Up.” “If 154 million plays means £11, I get more from Radio Stoke playing “Never Gonna Give You Up” than I do from YouTube,” Waterman said. Granted, circumstances could be different for Astley and Waterman now, especially considering the video has now been viewed 313 million times, but at the very least the former gets to be in a commercial for Virgin Mobile and be a part of the Macy’s Day Parade.

YouTube loves the Rickroll. On April Fools’ Day in 2008, the site redirected every video on its homepage to “Never Gonna Give You Up.” But YouTube has also accidentally removed the popular video on at least two separate occasions due to bogus copyright complaints. YouTube operates with a “pull first, verify later” approach, reacting quickly to delete videos that may have been illegally updated. That’s resulted in countless videos being falsely flagged and removed. Not even Rick Astley is immune to it.

6) A breakfast sandwich called the “Rickroll” is an actual thing

Yup, Portland, Maine, has a restaurant that serves a breakfast sandwich called the “Rickroll.” Courtesy of Rick’s Lobby Cafe, the sandwich comes with scrambled eggs and sausage that’s wrapped in a buttermilk pancake and covered in maple syrup. Apparently, the restaurant once had a “Rickroll Challenge,” where three guys tried to eat three Rickrolls in under 10 minutes. Ultimately, some dude named Antonio wins. I guess you could say…he didn’t give up on those Rickrolls.

There are at least four Rickroll-related games that can be played online: this one, this one, this one and this one. The third one is a personal favorite, just because compared to the other three, it’s the one that at least makes sense. But that’s what also makes it great—that some kid brought together “Never Gonna Give You Up” and Luigi in a way that’s undeniably addictive. So, good job Justin0208707, you young genius, you.

Ultimately, the U.S. used psychological warfare against Noriega, setting up a perimeter of speakers that played a playlist of pop music that just so happened to include “Never Gonna Give You Up.” On January 3, 1990, Noriega finally surrendered and was taken to the United States as a prisoner of war. Surprisingly, no one has asked Astley how he feels about his upbeat song being used as a method of torture. Hopefully, someday, we’ll get an answer.

When Apple released iOS 7 in September 2013, it featured a new feature called the Control Center, which is unlocked by swiping up on the home screen. For users who needed help figuring it out, Apple launched a support center online, and it tucked in a sly nod to the Rickroll.

The screengrab didn’t actually redirect to the YouTube video, but it’s the thought that counts.

10) Spotify is the master of the Rickroll

In April 2017, crafting witty messages using song titles on Spotify became one of the best memes of the year, but team behind the Twitter support handle @SpotifyCares has been doing it for years. In December 2015, Markus Price complained on Twitter that the music-streaming service recommended “Never Gonna Give You Up” while he was listening to some video game soundtracks. That led to this priceless Twitter exchange.

@actualtrashbag Hey, Markus. It was never our intention to https://t.co/FChH42ApiT you! ;) /T

And you can probably guess how the rest unfolded from there.

On April Fools’ Day in 2016, Ted Cruz trolled Donald Trump, then his fiercest rival in the 2016 GOP race, with a Rickroll. He uploaded a YouTube video titled “Donald Trump Accepts Cruz’s Debate Invitation | #CruzinToVictory,” but instead of showing the promised debate, it’s just a minute of classic Astley.

Think it’s safe to say Trump got the last laugh.

12) Rick Astley got Rickrolled in his own Reddit AMA

To celebrate the release of his first new album since 1993, last year’s 50, Astley took to social news site Reddit for a Q&A, it was a minefield of rickrolling. Here’s one example from the thread:

13) Rick & Morty pulled off the most epic Rickroll ever

Fans had waiting since October 2015 for the third season of Rick & Morty when the show dropped its “EXCLUSIVE! SEASON 3 Opening Scene” on Feb. 20. The supercut has been viewed more than 5.5 million times.

14) You can send a Rickroll by mail

Just when you thought the world had run out of ways to Rickroll, some genius created “Rick Roll in a Box,” a service that will anonymously mail for you a white box that, when opened, plays Astley’s hit—all for the low, low price of $14.