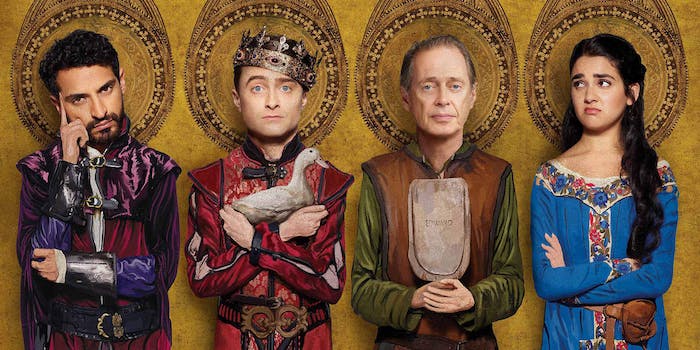 Last year an angel named Craig–who is the sole being responsible with answering humanity’s prayers–carried the literal weight of the world in season 1 of Miracle Workers. Managing the DMV-like bureaucracy in heaven was a herculean task, but eventually, Craig made it out okay. Kind of.

Season 2 has familiar faces playing all-new characters in a completely different point in time: the dark ages. Instead of focusing on the hereafter, Dark Ages focuses on a small village, dealing with similar problems we face today like massive income inequality, lack of dependable healthcare and widespread ignorance while living under the thumb of a ghoulish tyrant. The same comedy heavy hitters from season one are back, including Lorne Michaels (Saturday Night Live), Simon Rich (Man Seeking Woman), and Jorma Tacome (The Lonely Island) serving as executive producers.

Here’s everything you need to know to watch Miracle Workers: Dark Ages online.

How to watch Miracle Workers online for free

TBS is available on many of the major live TV streaming services. When you’re trying to decide which one is best for you, you’ll want to weigh the cost, the other channels you’ll receive, and the compatible devices for streaming.

Hulu with Live TV not only gives you access to on-demand content, but you’ll also be able to stream live TV, including local networks. If you miss Miracle Workers when it airs, no worries. It will be available on-demand along with countless movies, classic programs, and of course, original series available exclusively on Hulu. You’ll also get access to almost 60 channels, including Bravo, ESPN, USA, and plenty more. (Here’s the complete list of Hulu Live TV channels.)

Sling TV offers two cable packages based on your particular needs (Sling Orange and Sling Blue), both of which cost $30 per month. You’ll find TBS in both packages, but if you have to choose only one, we’d recommend Sling Blue, a sports-heavy package that also includes FS1 and FS2, NBCSN, and NFL Network. That’s in addition to great entertainment options like FX, AMC, and Lifetime. To get ESPN channels, Freeform, and Disney, you’ll want to upgrade to Sling Orange + Blue, which costs $40 per month. (Here’s the complete guide to Sling TV channels.)

If you’re a sports fanatic, FuboTV is a streaming service built just for you. Plus, it comes with TBS, so you’ll be able to watch Miracle Workers in-between games. There are tailor-made packages for fans of basketball, international soccer, golf, and even rock climbing. For the rest of the family, there’s a suite of great channels including Food Network, IFC, Bravo, Cartoon Network, and more. (Here’s the complete FuboTV channels list.)