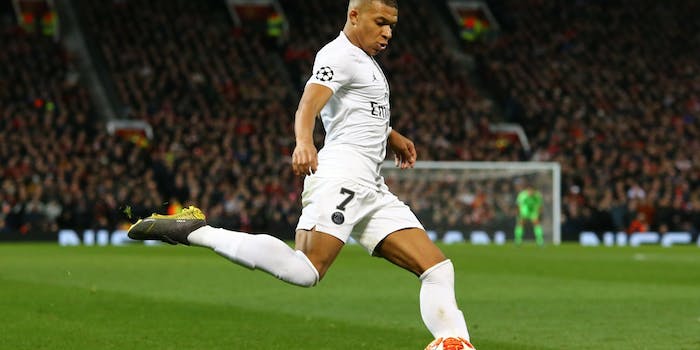 How to watch Ligue 1 online for free

Ligue 1 is the home of Neymar, Kylian Mbappe, Angel di Maria, and Edinson Cavani—and that's just on one team.

Founded in 1932, Ligue 1 (which officially changed to that name in 2002) is France’s top-flight pro soccer league, and it’s one of the top leagues in Europe. Of course, France is the reigning World Cup winners, and though that squad features plenty of players who feature for top sides in Germany, England, and Spain, Ligue 1 does play host to some of France’s finest, as well as up-and-coming young homegrown talents and an assortment of players from all over the globe.

Ligue 1 (with the “one” usually pronounced “un,” to emphasize its Frenchness) is the top-tier league in France, structured like the Premier League and La Liga, with 20 teams vying for an annual title in a season that runs from August to May.

Each team plays 38 matches a year—at home and away against each of the other 19 teams in the league—acquiring three points for a win and one point for a draw. The team with the most points is declared the league champion (with goal differential serving as a tiebreaker), and the two worst-performing teams are automatically relegated to Ligue 2, with the two-best teams in Ligue 2 moving up to Ligue 1. Like in Germany (but not England or Spain), the 18th-place team gets a last chance, playing in a relegation playoff match against a challenger from Ligue 2. (That team, in a complicated wrinkle, is determined from the third place team playing the winner of a match between the fourth and fifth place team.)

The Ligue 1 teams, like its European top-tier league counterparts, play their final matches all on the same time at the same time. (This year, it’s Friday, May 24 at 3:05 pm ET.)

Which Ligue 1 teams should I know?

It starts with PSG, short for Paris Saint-Germain, who have won five of the last six titles and have the league’s most recognizable stars: Brazilian captain and perennial best-player-in-the-world listmaker Neymar, French rising star Kylian Mbappé (hero of the last World Cup, still just 20 years old), and stalwart Uruguayan striker Edinson Cavani. It was also the home for veteran Italian goalkeeper Gianluigi Buffon after he left Juventus and has been the longtime club team for mainstay Brazilian defender Thiago Silva and Argentine winger Angel di Maria. It’s a team loaded with talent, which has been dominant in Ligue 1 but has missed out on what the squad’s really built for: winning a UEFA Champions League title.

Monaco won the league outright in 2016-17 but moved key players to other teams following that triumph, and they had a particularly rough ’18-’19, finishing near the bottom of the table. They still have a recognizable cast that includes Cesc Fabregas, Stevan Jovetic, and Radmael Falcao, and added Russian player Aleksandr Golovin, one of the most-hyped young players at the 2018 World Cup.

Each of the following services carries beIN Sports, providing a one-week trial and therefore an easy way to watch Ligue 1 matches for free.

Spanish-speaking viewers have quite a few options. For bilingual families, you might consider the Español: Best of Spanish TV package for either Sling Orange or Sling Blue for 24/7 specialty channel LaLiga TV and beIN Sports Connect: Channels 4-9, which features matches from LaLiga, Ligue 1 and Copa del Rey, among others. Both packages cost $5 per month after your free trial. Sling TV Latino is another Spanish-language package for $10 per month, including NBC Universo, History en Español, and—of import to soccer fans—four beIN SPORTS channels. (And choosing Sling TV Latino + Sling Orange for $30 per month gives you access to ESPN Deportes.) For more information, check out our guide to Sling TV channels and our Sling TV review.

FuboTV is a solid TV streaming service option, whether your tastes run to entertainment (AMC, Syfy, FX), news (MSNBC, CNN), or sports (NBA TV, NFL Network). If you’re a soccer fan, however, it will appear tailor-made for you, with 10 beIN SPORTS channels, NBCSN, FS1, FS2, and UniMás all on tap. If you can’t watch a match live, FuboTV offers a three-day replay for each match and 30 hours of cloud DVR. (Check out the complete FuboTV channels list and our comprehensive FuboTV review.)

Kylian Mbappé: Through the first 37 matches of the season, Mbappé has scored an incredible 32 goals to lead the league. Friday’s match against Reims (the featured Ligue 1 match on BeIN Sports) may be Mbappé’s final match with PSG. It’s likely (if transfer rumors are to be believed) he’ll be with Real Madrid when La Liga kicks off this coming August.

Nicolas Pepe: The French-Ivorian winger has been a huge reason Lille’s rocketed to a Champions League place this year, with 22 goals to lead Les Dogues. He’s also the subject of intriguing transfer rumors. Don’t be surprised if you see him with Arsenal sometime during the summer.

Edinson Cavani: Known for his partnership with Luis Suarez on the Uruguay national team, Cavani came to PSG from Napoli in 2013 and has contributed since, teaming with Zlatan Ibrahimovic and now Mbappé and Neymar as part of some very potent offenses. Should he get a goal this Friday, he’ll reach the 25-goals-in-all-competitions mark for his ninth straight season.

Florian Thauvin: Marseille’s top scorer had an unsuccessful move to the Premier League in 2015, coming back to Marseille on loan after just 16 total appearances and a single goal, but he’s been a consistent performer for Les Phocéens since returning.

Neymar: The mercurial talent, who moved from Barcelona to PSG in 2017, has battled injury and attracted controversy throughout his latest season, but he has still appeared on the scoresheet enough to be one of the league’s top scorers.

Looking at the list, it’s pretty easy to spot when PSG started moving into the upper echelons of spending and therefore Ligue 1 dominance—but it hasn’t always been that way.

Here’s the complete list of champions going back to 1932 (and even back to 1893, before there was a professional league).