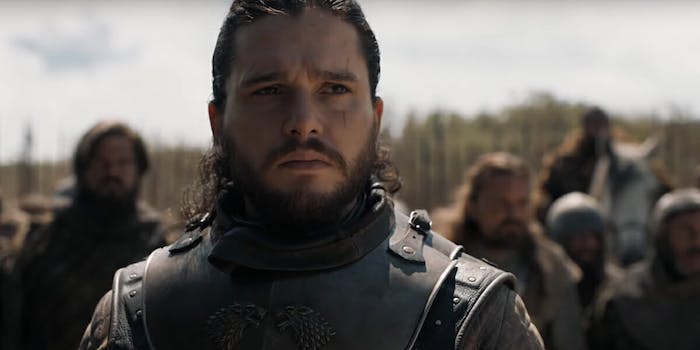 How to watch ‘Game of Thrones’ season 8, episode 5 for free

Are the moms about to burn them all?

You know that terrifying moment when you realize your mom is mad but she hasn’t started yelling yet? That’s basically how it feels right now on Game of Thrones. Season 8, episode 5 will be a battle between the mothers/mad queens—we’re pretty sure it’s about to rain fire.

With the threat in the North presumably over (if you don’t count Sansa’s icy shoulder to Daenerys), the fight moves to King’s Landing. And with the Hound on his way, this week’s episode may just give us the moment we’ve finally been waiting for most of all. That’s right, it’s CLEGANEBOWL, bitches. (*airhorns*)

This will be the penultimate episode of Game of Thrones, which means it’s nearly time to say goodbye to Westeros. Hopefully, it will be a little easier than Jon’s farewell with Ghost. Director David Nutter returns for one last episode before showrunners D.B Weiss and David Benioff direct the series finale.

Here’s everything you need to watch Game of Thrones season 8, episode 5 for free.

Game of Thrones season 8, episode 5 is available exclusively on HBO.

When does Game of Thrones season 8, episode 5 air?

Subsequent episodes will be on Sundays at the same time. There are six episodes scheduled for the final season, ranging in length from 54 minutes to a whopping 82 minutes. This week’s episode will be 78 minutes long.

How to watch Game of Thrones season 8, episode 5 for free

For a couple of seasons now, Game of Thrones has emphasized the power that many of its female characters hold. They’re in charge of the Seven Kingdoms and their own forces. They control castles and entire regions. They’re skilled warriors, assassins, advisors, and knights. They held their own when they faced the Night King and the Army of the Dead.

But much of that went out the window in an episode filled with fracturing relationships, undermining character arcs, begging, and a big death that will not sit well with those who witnessed it both within and out of Westeros.

After the living’s victory at Winterfell last week, the survivors celebrate before looking to the south. Of course, if Daenerys Targaryen and Jon Snow are going to wage war against Cersei Lannister, it’s not going to go well. People will get hurt, captured, and killed. There will be potential prisoners, traitors, and schemers among their own. —Michelle Jaworski