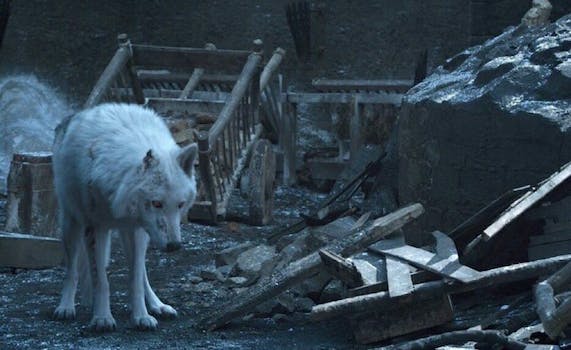 Jon Snow didn’t pet his direwolf before leaving Winterfell, and fans are distraught

Give that good boy some love!

After Ghost, Jon Snow’s direwolf, disappeared amid the bloody Battle of Winterfell, many fans feared he’d died, so they were relieved to see him battered but otherwise healthy and adorable in Sunday’s Game of Thrones episode. As such, they were understandably very upset when Snow left for the series’ epic final battle at King’s Landing without giving his loyal companion a single pet! Memes flooded Twitter in the good boy’s defense.

Fans’ attachment to Ghost is understandable, especially given all the recent major character deaths. The Stark family came across Ghost and his siblings when they were just pups all the way back in season one. With a direwolf being the family house’s sigil, it seemed only fitting that each of the Stark children received one. As their half-brother, Snow is left out, but he later chances upon an albino runt of the litter, Ghost, and the rest is history.

Ghost stayed by Snow’s side as he joined the Night’s Watch, retook Castle Black, and died after being stabbed in a mutiny (and then was promptly brought back to life because magic). Ghost deserved a pat goodbye—at the very least. One tweet asking for retweets if Ghost was “the best boy” and “deserved all the pets jon didn’t give him” garnered more than 10,000 tweets in less than 12 hours.

Rt if you think ghost was the best boy in winterfell and deserved all the pets jon didn't give him #GameOfThrones pic.twitter.com/JPWj0a0aVg

Fans were also quick to point out that Snow had enough time to give two of his other companions, Tormund Giantsbane and Sam Tarly, hugs goodbye on his way out to what may be his final battle. Apparently even in a 90-minute episode, he can’t find time to say goodbye to one very good boy.

These #GameofThrones episodes are 14 hours long and they couldn’t find 2 seconds for Jon to AT LEAST touch his forehead to Ghost’s to say goodbye?! Ghost is a GOOD BOY and he deserved better pic.twitter.com/yyece2ziCS

The Twitter account Can You Pet The Dog?, @CanYouPetTheDog, even weighed in on the travesty after a few incensed fans reached out to them. The viral account publishes tweets acknowledging whether or not certain games allow players to pet the dogs within them. On at least one occasion, the account lamenting a game’s lack of this feature prompted the developers to patch it into the game. “Many people have reached out to say that you cannot pet the dog in tonight’s Game of Thrones,” a post from Monday morning reads. “This is true, but since it is inherently a non-interactive medium, I should add that you also cannot pet the dog in any episode of television ever made.”

Sure, Snow’s probably got a lot on his mind what with discovering his lover is his aunt and that fact that he’s in line to rule all of Westeros, but come on! Give poor Ghost some love! If not, there’s obviously a horde of fans willing to give this doggo the pets he deserves.