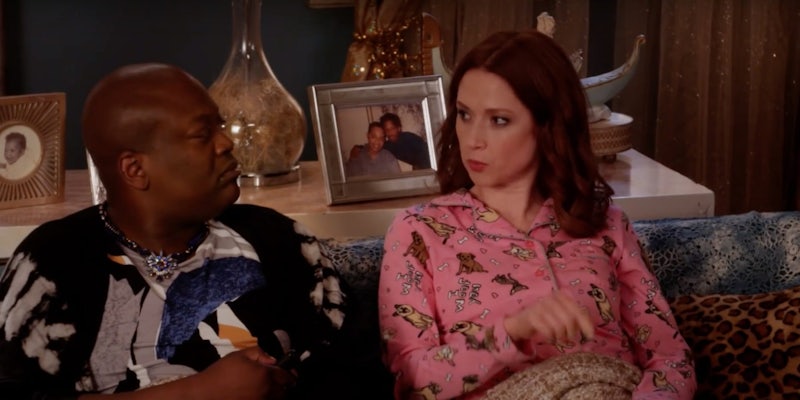 Unbreakable Kimmy Schmidt ends its run on Netflix much as it began: hilarious, poignant, and criminally underappreciated.

The final bow of episodes before a possible movie from Tina Fey and Robert Carlock’s comedy about trauma and survival are topical and hilarious. The cast remains as perfect as ever, while the characters get a fitting ending in this early Netflix standout.

When it was announced last year that Tina Fey and Robert Carlock’s underdog comedy would be ending after its fourth season, the show’s small but devoted fan base was naturally upset. But while a possible movie still appears to be in the works, those of us paying attention knew that Netflix was no longer very invested in the series by the time the cancelation was announced.

Though beloved by many, especially early on, it always had its detractors, too. And as Netflix continued to expand its content library at alarming rates, it soon felt like Unbreakable Kimmy Schmidt was too stuck in the middle to go on for long; not a niche comedy like The End of the Fucking World, not a massive hit like Stranger Things. The series was adapted from a network TV, pilot, after all. And while it would’ve been unthinkably daring on NBC, it’s easy to understand why the Netflix algorithm ultimately couldn’t find a place for it.

For those of us who stuck in there, the back half of season 4 holds plenty of rewards. (The first six episodes dropped last year, just in time for Emmy qualification.) The book Kimmy (Ellie Kemper) wrote to teach boys not to be creeps starts catching on, just as Jacqueline (Jane Krakowski) and Lillian (Carol Kane) realize that younger men are interested in them now, as younger women have raised their standards. Titus (Tituss Burgess) discovers that all you have to do to be in Cats is walk onstage, and brags about his role as a doorman on an unreleased episode of Daredevil to win his ex Mikey (Mike Carlsen) back. It’s revealed that the company Kimmy works for is involved in data mining, in the show’s attempt to comment on recent tech industry scandals. One particularly ambitious episode drops the narrative altogether to do a parody of the Gwyneth Paltrow movie, Sliding Doors, in which the characters’ lives play out dramatically differently based on alternate choices they make. Guest stars including Anders Holm, Jon Bernthal, Busy Philipps, and Greg Kinnear pop up. And the show reckons with the Me Too movement in the most Kimmy Schmidt way possible—through puppets.

If this last detail makes you cringe a bit, you probably won’t be alone. Unbreakable Kimmy Schmidt has always courted controversy, usually through its handling of race. Yet for all of the show’s “problematic” tendencies, it continues to have a subversive social conscience, too. Let’s not forget that this is essentially a comedy about a rape survivor. To not address toxic masculinity would be a violation of the series’ very premise, despite its goofy tone.

And maybe this is in part why Kimmy Schmidt never became more of a phenomenon. It’s hard to reckon with a show that deals with issues so inherently serious in such a goofy way. Unlike more serious contemporaries, the show never set out to be “woke.” The social justice aspects were a part of the comedy Carlock and Fey were already generating. Take the episode from last season, “Party Monster,” a pitch-perfect parody of true-crime shows focusing on Kimmy’s nemesis, the Reverend Richard Wayne Gary Wayne (Jon Hamm). It should be antithetical for any character so intensely evil to be amusing, but Hamm’s zany performance is just too hilarious for “Party Monster” not to land.

Would Fey and Carlock have been better off not approaching these taboo subjects at all? Is it possible for a show so unconcerned with offending people to also be progressive?

Frankly, I don’t know, and it’s too late to answer all of these questions, anyway. I do know that Unbreakable Kimmy Schmidt always made me laugh. In its best moments, it was positively brimming with amazing writing from several of the funniest people in TV, brought to life by even more amazing performances from a flawless cast. It will be missed.