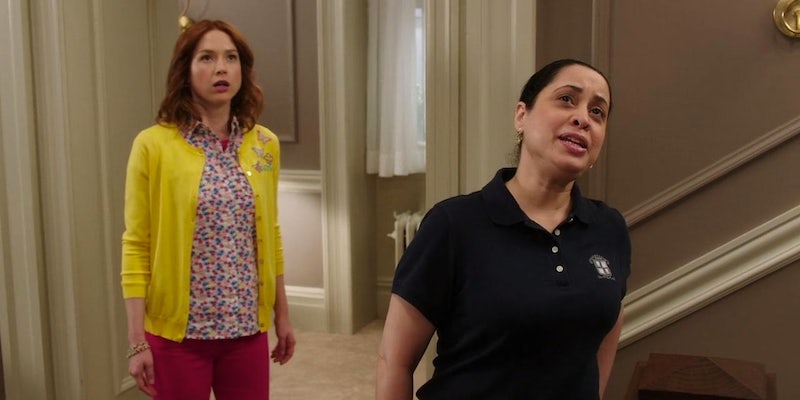 A go-to rule of racial humor, or any humor for that matter, is to punch up, not down.

Way back in 2009, before Netflix Instant had its grasp so firmly on the American attention span, my roommates threw an “East L.A.”/“dress like a Mexican” party. The concept didn’t really sink in until that evening, when my predominantly white group of friends arrived dressed, well, like Mexicans—or at least the popular perception of East L.A. Mexican-Americans, or cholos. You know: bandanas, single-buttoned flannel tops, white tank tops, and khaki pants pulled up to their chests. Many of the women wore their bangs high, doused with Aqua Net, a popular look for young inner city Latinas in the ’90s. I felt embarrassed and ashamed, hyper-aware of my skin, one or two shades darker than theirs. They couldn’t be racist, I thought. In fact, they had brown friends. I was one of those brown friends.

But it was all a joke. Or was it homage? Lighten up. The problem was that their “joke” didn’t do anything to challenge the systems of power that create Latino poverty in Latino communities or a failing educational system that puts kids on the streets and into gangs—nor was that the intention. To look like a Mexican was the main objective, and that was the joke. Admittedly, I had dished out my fair share of racist humor during my early 20s, arguing that it was satirical. If folks felt uncomfortable, that was their problem. “I can’t be racist. I’m Mexican!” I would say. It had never occurred to me that an uncomfortable response to my “edgy” humor indicated that racist jokes that targeted the historically oppressed (no matter how ironic or well-intentioned) were wrong. I was complicit in my friends’ Mexican drag, and I hadn’t realized it until I was the butt of the joke.

Watching the first season of The Unbreakable Kimmy Schmidt, the series from 30 Rock’s Tina Fey and Robert Carlock released on Netflix last weekend, I periodically remembered that party, those costumes, the obliviousness of my roommates, and my own rude awakening. Kimmy Schmidt is riddled with contradictory moments that either critique racial inequality or reinforce it through the use of one-dimensional stereotype. Unfortunately, the show is rife with the latter.

The series tells the story of Kimmy (Ellie Kemper), one of four Indiana “Mole Women” kidnapped and brainwashed to follow a doomsday cult leader who locked them into a bunker to survive the imminent apocalypse. The end of the world never came, and the women remained locked in the bunker until present day—a total of 15 years. Once they are rescued, Kimmy emerges from the bunker with so much optimism and curiosity, ready to start her new life.

Although the show takes place in New York, the characters don’t necessarily reflect the cultural diversity of the metropolis. The New York Kimmy inhabits is the same New York of Seinfeld, Friends, How I Met Your Mother and, while we’re at it, Girls. Of course, the characters in Kimmy Schmidt aren’t exclusively white like the casts of its predecessors; however, featured characters of color don’t exhibit nearly as much depth and development as Kimmy is afforded. With the exception of Kimmy’s roommate Titus (Tituss Burgess), the show’s recurring characters of color are basic caricatures with little identity.

This is especially true with the two recurring Latina characters in the show. Donna Maria (Sol Miranda) was one of the Mole Women, lured into the bunker while she worked for Happy Maids. “You thought this was a job,” an observation Matt Lauer shares with Donna Maria on the Today show. Vera (Susanna Guzman) works as a housekeeper for Kimmy’s boss, Jacqueline Voorhies (Jane Krakowski). Because these are the only depictions of Latina women in the series, it makes me wonder if Tina Fey and Robert Carlock can even imagine a context in which these women had the same social mobility as Kimmy Schmidt.

According to the “Latino Media Gap,” a report published by Columbia University in 2014, American Latino participation in media production has dwindled in spite of the growing population. The report indicates this is due to the fact that many Latino actors are not offered leading roles, and the few roles offered fall within three categories: criminals, sexual objects, and cheap labor. In fact, the report notes that “69% of iconic media maids in film and television since 1996 are Latina.” There are exceptions in Kimmy Schmidt, though. The only other Latino characters that appear in the show fit in none of the three categories—unless mariachis count as cheap labor.

Similarly, Kimmy Schmidt revives tired, old Asian stereotypes with Dong, the Vietnamese immigrant and Chinese food deliveryman played by Ki Hong Lee. Late in the season, Dong becomes Kimmy’s primary love interest, a position that is notably rare for Asian-American actors. But Dong’s heavily accented English and math prowess overshadow what should be a groundbreaking role. As Daily Beast’s Gabe Bergado writes, “He should be fleshed out as more than just an algebra tutor that’s also boyfriend material for Kimmy.”

Through his daft portrayal, Dong could be seen a callback to John Hughes’ Sixteen Candles and Long Duk Dong (Gedde Watanabe), an Asian foreign exchange student with an insatiable lust for American women—a performance NPR’s Kat Chow calls “cringeworthy.” The cringe factor also reminded me of Margaret Cho’s appearances on 30 Rock as Kim Jong-il and Kim Jong-un, as well as her extension of that performance at this year’s Golden Globes, which has been derided as “minstrelsy” despite Cho’s Korean heritage. Dong is a very likeable character, even if his affected, Charlie Chan-esque accent distracts from what little nuance he is given.

The tone-deaf portrayal of Latinos and Asians (and let’s not forget about Jane Krakowski’s brief Native American subplot) makes the actually astute racial satire in Unbreakable Kimmy Schmidt simultaneously welcome and confusing. There’s a moment in the first 90 seconds that so perfectly captures racial issues present in the news media. As a reporter covers the Mole Women’s rescue, the caption below her reads, “White Women Found,” and beneath that in smaller text, “Hispanic woman also found.” That joke works, though. And before Donna Maria’s occupation was revealed on Today, I thought it was representative of the type of critique to expect from the show.

One scene that’s drawn a lot of attention involves Kimmy’s roommate and best friend Titus, an unabashedly gay black man, who dreams of his 15 minutes of fame while dealing with systemic biases that turn his identity into an obstacle. Titus realizes one day, while walking home from a job dressed as a werewolf (or Frankenwolf), that he’s being treated much better than if he were strolling about without the makeup. Cabs stop for him, a cop stops him to say hello, and a stranger asks him to hold her baby. Titus’ treatment is so remarkably different that he decides to live out his life in the wolf makeup.

A go-to rule of racial humor, or any humor for that matter, is to punch up, not down. As Lindy West explains in her guide to hipster racism: “People in positions of power simply cannot make jokes at the expense of the powerless. That’s why, at a company party, you never have a roast where the CEO is roasting the janitor.” So when a show like Unbreakable Kimmy Schmidt, with white producers and largely white target audience, demonstrates a critical self-awareness—in this case a joke about how the media favors white victims over victims of color, or how it’s safer for a queer black man to walk around the city literally dressed like a monster—racial humor can be far more effective. But when it comes to representing people of different cultures, the creators still have a lot of work to do.

A lot has changed since the Mexican party. I still catch myself telling inappropriate jokes on occasion, but now I immediately correct myself. It’s not really a matter of self-censorship, of course; I just have to ask myself how what I am saying makes matters better. Does it align me with the oppressed or oppressor? Without that self-awareness, I risk falling into the same complacency that put me in the position I was in the night of the Mexican party. Would that have stopped it? Maybe not. I never told my roommates how I felt about the Mexican party. I doubt they gave it a second thought. The cartoonish depiction of people of color at the party, as well as in television, does little to empower the historically oppressed. The continuous reproduction of those images, in turn, reinforces the idea that these are the only roles people of color serve.