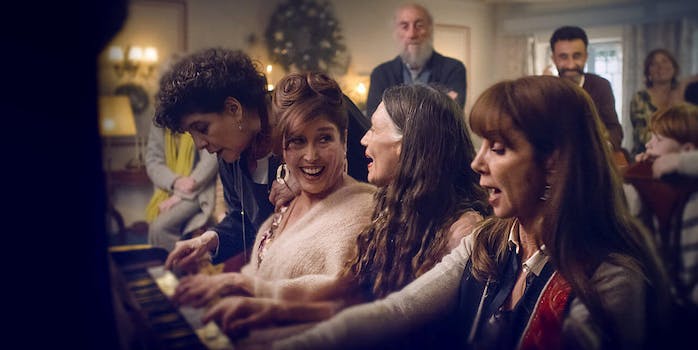 'Three Days of Christmas' is a delightful surprise this holiday season, a grown-up treat for drama fans looking for a break from Hallmark.

Due to the weaponized marketing of the Hallmark channel, you’d be forgiven if instinct was to ignore a miniseries on Netflix titled Three Days of Christmas. It’s a name that suggests cozy fires, warm cups of cocoa, a whimsical romance wrapped up just before the big day. You wouldn’t expect a multigenerational drama spanning decades’ worth of dark family secrets. Yet this thoughtful holiday surprise is a shining jewel of Netflix’s holiday lineup.

Netflix’s latest international production is a wild change of pace from traditional holiday fare, in some ways closer to Little Women than A Christmas Carol. Each of its three episodes focuses on a different Christmas in the lives of a family. The first Christmas, set in the aftermath of World War II, sees them struggling to hide a fugitive’s daughter from an evil police officer. We rejoin the family decades later, with the now-grown children struggling to find peace in adulthood. The final episode sees them sharing their final holiday.

Discussing Three Days of Christmas is difficult without giving away its best secrets. While the low budget may occasionally give soap opera vibes, incredible performances elevate the production. Since the film starts during the reign of Francisco Franco, a dictator who ruled Spain from 1939 to 1975, the specter of potential violence looms heavy on the family. The peace of their Christmas morning is shattered when a fugitive appears out of the woods. He makes the family’s three daughters promise to protect his daughter, then flees from the police. In a moment, decades of these young women’s lives are shaped.

It’s remarkable just how many stories are juggled across these three episodes. Plot seeds are planted in episode 1 that don’t get picked until episode 3, yet each individual segment has more than enough structure to stand on its own. Even with whole decades of these characters’ lives having passed between segments, Three Days of Christmas never paints with broad strokes. We’re always filled in on what’s happened since we last saw our heroes, thankfully without exposition dumps.

Instead, we get to witness the ways secrets and family responsibilities boil over during the holidays. Each complication, from coming out to adultery to the threat of arrest, is handled with grace and time. Every moving piece is treated with respect, never rushing to a conclusion but literally giving characters decades to deal.

Three Days of Christmas is far darker than your standard Netflix Christmas content. In fact, we’re pretty sure it’s the first Christmas Netflix movie with a TV-MA rating that isn’t a comedy. For families wondering if Three Days of Christmas is suitable for holiday watching, this isn’t a particularly hard TV-MA. It earns its rating through two passionate F-bombs. There’s no nudity or onscreen sex and the limited violence is handled with restraint.

By and large this is a perfectly wonderful Christmas melodrama/thriller, though there are a few things that could be improved. First off, each segment feels dramatically different in tone. The first episode is a tense historical thriller punctuated with teenage romance. The second almost plays like a David Mamet play about the destruction of a family, while the final episode delivers some surprisingly effective dark comedy given all that’s come before it. The wildly different tone of each segment can be a little jarring at times, though it also fits the ages of the subjects. What terrifies us as children tears us apart as adults, but in old age each set of fears gains an extra level of perspective. Or, at least, a willingness to be more clever with your schemes.

Three Days of Christmas is a delightful surprise this holiday season, a grown-up treat for drama fans looking for a break from Hallmark. While it may be too dark for small kids and carries a mature rating, it doesn’t really feature any content that’s worse than many PG-13 films. It handles some truly complicated topics, from adultery to LGBTQ acceptance, with grace without losing any dramatic weight. With each segment running around an hour give or take, this is the perfect series to pick up and put down throughout a Christmas weekend. Just make sure to keep some tissues nearby, just in case.