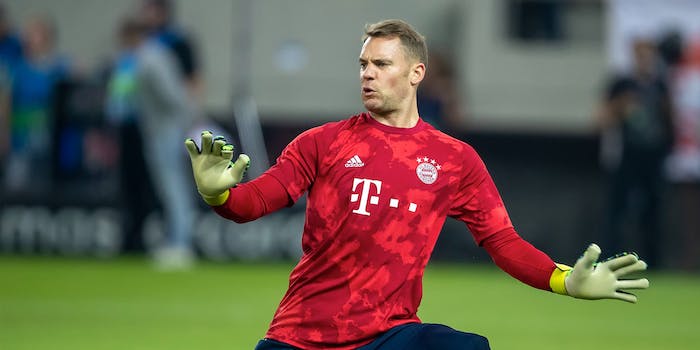 How to stream Bayern Munich vs. Fortuna Dusseldorf live

Bayern's getting closer to another Bundesliga title. Can Fortuna Dusseldorf block its path?

Here’s everything you need to know to live stream Bayern vs. Düsseldorf on Saturday.

Thanks to Tuesday’s Der Klassiker match, Bayern Munich is one step closer to winning its eighth straight Bundesliga title, and hoisting a soccer trophy that looks more like He-Man’s shield than something you’d get for winning the league.

There are a few obstacles in the way between Bayern and its title, but Fortuna Dusseldorf is probably not that. Die Flingeraner are currently 16th in the league, and will certainly be fighting for every point they can get. Just look at this match’s odds, however, will show you just how very lopsided this might be.

One reason to watch if you’re American, though: U.S. men’s national team goalkeeper Zach Steffen is on loan from Manchester City to Fortuna Dusseldorf this year. It’s certainly been a test for the young keeper to face the best of the Bundesliga this season, and Bayern presents many and varied tests for even experienced, accomplished keepers. If he’s in between the sticks on Saturday, it’ll be worth watching him save what might be many shots.

This match will be shown on FS1 and TUDN.

Bayern Munich handled its Dortmund rivals, 1-0, one of the most anticipated matches of the season … which just happened to fall on a Tuesday. The difference maker came via a wicked Joshua Kimmich curler toward the end of the first half. There was one “Why do we even have VAR play?” that Dortmund should be mad about still, which came in the 58th minute. Teen sensation Erling Haland hit a shot that struck Bayern defender Jerome Boateng in the elbow and deflected away from target—Boateng was on all fours when the shot was released, and it appeared he moved his arm to catch the ball, but play resumed without any real pondering to his motives.

Fortuna Dusseldorf got a win to help its fortunes, beating hard-luck Schalke 2-1 on Wednesday. American international midfielder Weston McKennie put Schalke ahead early in the second half, but then Rouwen Hennings and Kenan Karaman put in goals to put the hosts out in front for good.

According to the DraftKings Sportsbook oddsmakers (as of May 29), there might not be a heavier favorite in any sport anywhere than Bayern Munich is on Saturday.