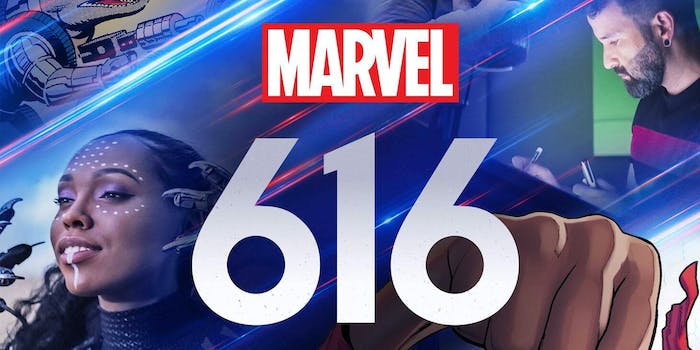 A showcase of the minds behind the masks.

The legacy of Marvel Comics is a storied one, that includes classic characters made popular by blockbuster films. Marvel’s 616 takes a deep dive into these characters and their creators.

Here’s everything you need to know to stream Marvel’s 616.

Marvel’s 616 is available exclusively on Disney+.

Disney+ offers one of the most beloved libraries of streaming content online. Namely, 500 Walt Disney Studios movies and 7,000 episodes of Walt Disney Television. It also includes selections from Pixar, Marvel, Star Wars, and National Geographic. They’re all members of the Disney family, after all. This includes 30 seasons of The Simpsons. Plus, like any streaming service worth its salt, there are exclusive original productions including Lady and the Tramp, Wandvision, Monsters at Work, and Marvel’s 616. One subscription works on up to four devices, and you can even download content directly to your device to watch anytime.