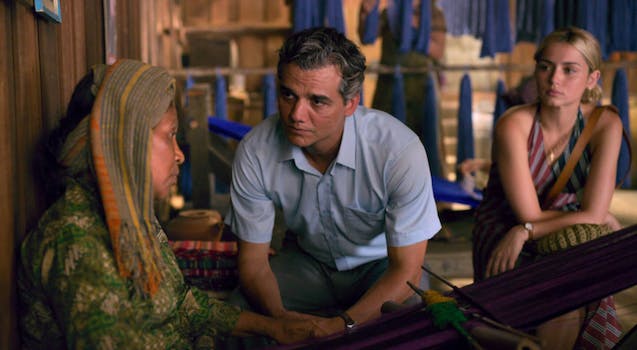 After the infamous bombing, the film goes back and forth from Vieira de Mello and his composite right-hand man, Gil Loescher (Brian F. O’Byrne), as they wait for help under the bombing’s rubble. While a couple of soldiers work to assist the trapped men, Vieira de Mello goes in and out of consciousness. In his inconsistent periods between pain and repose, he regularly travels back in memory to his time in East Timor, where he met the woman of his dreams and fully realized his life’s mission.

As the film progresses, though, the Craig Borten script puts significant crimps into the lush visuals. First, there’s no real centering focus on the film, and deep delving into its main character. It’s confused about whether it’s a love story or the consequences of Vieira de Mello’s unwavering idealism. Secondly, Vieira de Mello is mostly portrayed as an almost saintly figure, only missing his halo. His accomplishment in East Timor—facilitating the Indonesian government to make way for UN-supported independence—is shown here as his miracle. Even further, there’s an unusual sanding down of inherently knotty portions, such as his relationship with infamous Khmer Rouge leader Ieng Sary.

Barker’s hopeless romance and sentiment inform viewers of how he’s come to view Vieira de Mello as a human being. He’s also the director of the well-received 2009 eponymously named documentary. The imperfect drama feels service: a final sendoff of his muse, perhaps striving to accurately cover aspects only a talented actor in Moura could deliver. Moreover, the picture feels like something he owed to Vieira de Mello’s spirit, which comes across, especially in the scenes with Larriera and his friend, Loescher.

Sergio is a passable watch, perhaps if you’re looking for a good and easy cry; just don’t expect some deeper meaning or real discovery on Vieira de Mello. You’ll want to locate the documentary for that.