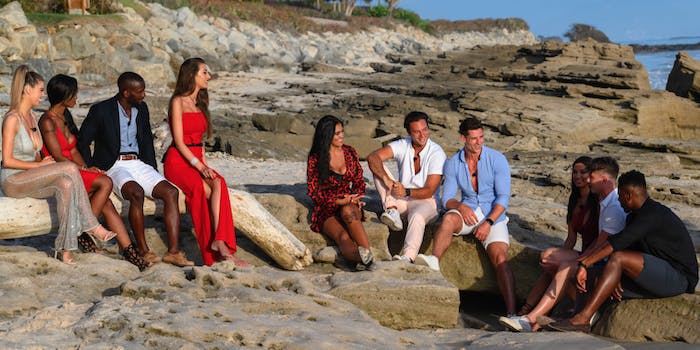 Too Hot to Handle

The competition is called “the retreat” and the goal is to get the sculpted and perky contestants to think beyond mindless flings and one-night stands and create genuine intimacy and trust in relationships. The men predictably identify as alphas, the women as obvious catches. Like The Circle, a narrator (comedian Desiree Burch) comments on the inane statements that often come out of contestants’ mouths; there’s also a running joke about how they’re not that bright. (In one episode, a contestant tries to draw a clock and isn’t sure whether it starts with 12 or 1, but what is time these days?)

Contestants must attend therapy sessions (in bathing suits) to learn more about themselves and potential romantic partners, but even those moments are reductive and performative. The women look at and draw their (own) vaginas with the guidance of someone named Yoni Puja, and are immediately empowered; the men cover each other in mud, scream, and talk through their feelings with a ponytailed “heart warrior” who claims they can’t reach that level of introspection when “females” are around. Too Hot to Handle hints at a queer relationship, which would break up the oppressive straightness of dating shows, but it appears to be just a plot point. Instead it leans on the reality show formula of creating and heightening drama (not here to make friends, etc.), and offers a bland, traditional view of relationships and sexuality, minus any insight.

And what of the rule-breakers? They’re the essential workers here. Despite the knowledge that breaking the rules depletes the grand prize for all the contestants, one-dimensional couple Francesca and Harry do it anyway, while the more forward-thinking Rhonda and Sharron try to play it safe. There is something interesting about how contestants view the shared prize money but Too Hot to Handle doesn’t get into socioeconomic discussions (boner killer). It offers an escape, and the promise that people can “grow,” but that would entail us actually getting to know these people.

By the end, I was extremely un-horny. So it works on one level.