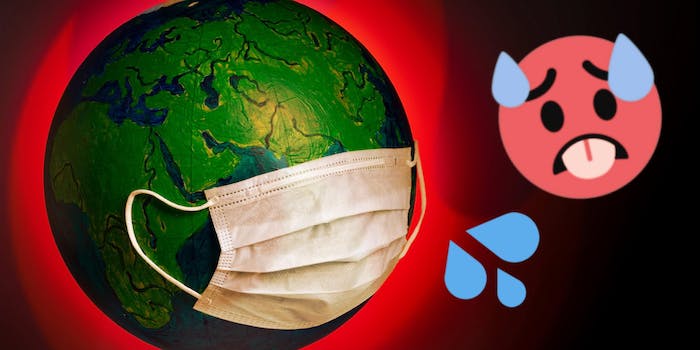 Social distancing is making everyone hornier—sort of

It's not as straightforward as it seems.

Here’s a brief summary of my month in quarantine: depression, binging Animal Crossing: New Horizons, playing VR games for hours on end, finally catching up on my reading backlog, and lots of sexting. I’ve been sexting with old friends, new friends, queers I met on Lex, gays I met on Twitter, crushes I’ve had for years, even friends I never realized I was attracted to (and vice-versa) until now. One month later, we have a name for this coronavirus-induced phenomenon: quarantine horniness.

I noticed it during my first weekend social distancing. I was alone and bored, so I made a post on Lex asking for nude swaps. By the time all the DM sliding slowed down, I had collected 30 message requests on Instagram—and that’s from respondents I decided not to hit up. I had to silence my phone because it was buzzing nonstop.

Social distancing has encouraged flexible boundaries around sexual communication, as well. Rose’s messaging groups usually have “generally strict-horny-is-prohibited rules,” but because she and her friends are alone and pent-up, these group chats have a hard time containing themselves lately.

“It is infectious as heck, just spirals out into a kaleidoscope of horntown,” she said.

But old habits die hard. Rose complains that ghosting is still a common problem among queer play partners. While this isn’t anything new for dating apps like Bumble and Lex, she suspects the coronavirus has made things worse because of how much uncertainty lingers.

“People aren’t sure what the hell is gonna be around anymore so they’re even more skittish about putting any roots down,” Rose said.

Boston-based sports reporter Britni de la Cretaz has an equally classic social distancing story. Initially, de la Cretaz’s partner was planning to move in with her in September, and they planned to ease into the transition for her two young kids. But when coronavirus hit and social distancing began, the two decided to quarantine together. As de la Cretaz puts it, “he brought over his cat and he’s basically thrown into co-parenting with me and we’ve been thrown into cohabitation.”

In theory, de la Cretaz and her partner should be all set for emotional and sexual intimacy. But it’s impossible for the two to have private time for each other between their work schedules and de la Cretaz caring for her kids. So while having sex is off the table, sexting has become another outlet.

“The two of us have always sexted a lot. Not in explicit bursts, like with discreet scenes/narratives, but throughout our day, interspersed with our regular texts,” she told me. “So sexting has remained part of how we’re sexual with each other, whether it’s me sending nudes from the bathroom while he works in the office, or sending texts from opposite sides of the couch while watching TV.”

“Like, it’s very weird looking back through my camera roll now, because I have all these topless pics with my face in them, and I’m like, visibly flushed red because my fever was already so high by then,” Bloch said. “When I really crashed, I ended up losing touch with my Lex girlfriends, since I wasn’t about to be committing my body to digital film for somebody else anytime soon.”

On the one hand, being extremely sick with coronavirus destroyed any desire to exchange nudes or flirt with other queers. But as time went on, Bloch experienced a strong need for emotional intimacy, something they claim is rooted in “the trauma of being that sick.”

“For me eroticism and desire are really rooted in nonsexual touch, and communication, and shared fantasies. It has a lot to do with like, having butterflies and chills down my spine,” they explained. “It has less to do with the specific sexual acts I feel like most [allosexual] people are into, and more to do with the ways my body physically reacts to intimacy.”

But not everyone is getting hornier during social distancing. Tech worker Lexi Saber began working from home in late February after her company instituted a remote work policy ahead of time. With plenty of alone time on her hands, her sex drive skyrocketed. She began sexting with friends and partners in the interim, and became so overwhelmed by her libido that she bought a Japanese fleshlight “just to deal with it.”

But once her polycule began social distancing two weeks later, her libido “dropped off to nearly nothing.”

In an article on quarantine horniness for Vox, social psychologist Justin Lehmiller explained people are experiencing both and less sexual behavior. But, according to Lehmiller, there are more people experiencing less sexual behavior. He points to Terror Management Theory, a psychological theory that suggests people change their values and actions to survive against an “existential threat.”

“Something we’re seeing in our data is that people are incorporating more online sexual activities that maybe they’ve never done before into their sex life as a way of getting some sexual fulfillment and also connection with other people,” he told Vox. “So it definitely does seem to be the case that there is more sexting, for example, going on right now. And more sending of nudes and other things like that.”

“There was one client who refused to hug me because I was so obviously sick but had no qualms sucking on my feet for an hour,” Snow told me.

In the meantime, Snow has noticed parallels to Lehmiller’s claims in her friend circle. She says friendships and relationships are going through “a very accelerated timeline,” as “the more we’re physically distant, the more we crave intellectual and emotional intimacy.” With an environment that feels apocalyptic, our grasp on time, space, and the world at large has changed so significantly, Snow said, that “things that we may have been shy about previously seem far more urgent now.”

“Not to get too ‘queering the quarantine,’ but I think the way the pandemic both accelerates and stalls time… mimics that coming-of-age, coming-out time a lot of queer millennials hit in our late-teens. Like, oh, this is what’s important, this is what feels good, this is what life is supposed to be like, and yet for some reason I have to hide it?” Snow said. “We don’t know when the pandemic is going to end or if we as individuals will even survive it [so] we feel another chance to chase that desire and curiosity we had previously written off as childish or silly or irresponsible.”

I’m a bit of an outlier from my sources in that my sex drive is already higher than average on a regular day. So as the world gets hornier, I’m chilling at my baseline. But that’s only because I had a tumultuous relationship with my sex drive up until the end of my gender transition when I came into my own as a pervert and leatherdyke. I learned then that there’s no “right” way to respond to stressful life circumstances like social distancing, and there’s no use forcing your libido to come back if quarantine has destroyed your sex drive.

In other words, this pandemic is traumatic, stressful, and disruptive. But it can also be an opportunity to better understand our own sexual needs and desires. Going through an overwhelming Lex nude swap taught me that an emotional connection is important to me when I sext. Now I know that I prefer flirting with friends over strangers. Everyone has their own unique relationship with sexting and social distancing that’s driven by a variety of factors, from their physiological sex drive to their relationship with stress, and now is a great time to start exploring what that means for you.