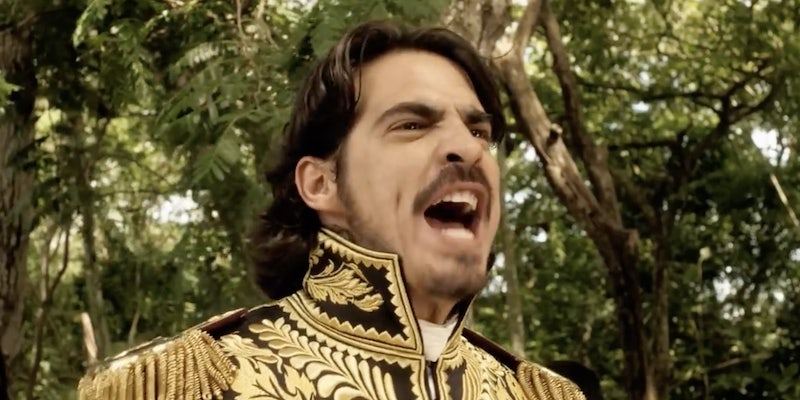 It’s not often that a Netflix series creates political strife like the insufferable, Colombian-produced Bolívar (Bolívar, una lucha admirable, or “an admirable fight,” in Latin America.) Claiming the neighboring country was running a “hate campaign,” Venezuelan President Nicolás Maduro expressed resentment, criticizing the production before its June 21 debut: “How many lies, deformations and trash will they put into Bolívar’s miniseries?” he said, according to El Universo. The embattled leader thinks the series will disrespect South America’s larger-than-life political giant and doesn’t like the story being told in the hands of Colombia, a country he’s recently tussled with politically.

That’s not what he needed to be concerned about.

Bolívar is a biographical melodrama liberally documenting the ascent of Venezuelan emancipator Simon Bolívar, who was given the title “El Libertador,” in a varied “life and times” progression. During the early 19th century, Bolivar guided secession of South American lands from the Spanish Empire in the early 19th century—including what is present-day Venezuela, Bolivia, Colombia, Ecuador, Peru, and Panama. On the flipside, scholars also recorded him as a philanderer, deserter, and coward. In a vacuum, in the right hands, his story deserves an abundance of space, depth, and dignity, given the enormous magnitude of his accomplishments.

The two actors, especially Abreu—something of a Brad Pitt-type heartthrob within the South American telenovela strata—manage to humanize Bolívar to a great extent. The acting, in general, is somewhat stronger than you’d expect, especially given the extreme telenovela tone of series. The hero is shown as something of a Latin aristocratic Criollo/Creole-styled version of the biblical David, thoroughly pummeling the analog to death an hour at a time.

It’s unfortunate, though, that given all the expanse of the show there couldn’t be more attention provided to its quality. Had the show’s collective runtime been cut to 30-40 episodes, with the same budget, a superior portrayal of 1800s South American and European life could’ve been presented. Decent costuming (specifically for the lead and supporting characters) and picturesque settings aside, most of Bolívar‘s visual aspects feel shoddy to the point of discourtesy. Even as tense moments in scenes develop, the base cheapness depresses the entire affair.

Moreover, and interestingly enough, they spent a small mint on an orchestra—there’s an unnatural obligation to construct grand soundtracks at every turn, big, small, or completely inconsequential. It proves bloated and silly.

The scripting also runs nonsensical and duplicitous, sometimes from line to line; this, however, could be due to lazy translations.

Where Bolívar goes from bad to irredeemable is within the focus of the scenes relative to their setting. Everything screams amateur. For example, in a setting where the mercurial leader leads his ragtag company of revolutionaries through mountainous terrain, half the group isn’t at all dressed or otherwise prepared for the voyage into frigid hinterlands, which surely everyone would have been familiar with. Hardly any effort is given to make the circumstances appear remotely plausible on-screen.

Bolívar is barely tenable by a handful of scattered performances. For someone to consume 60 episodes—at nearly an hour each—is not only laborious but a highly unlikely fulfillment given the hapless state of rendering. Turns out Maduro had a point.