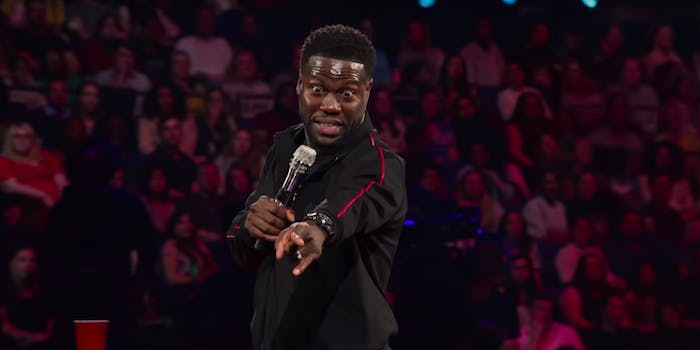 Why should Hart change if his product can be this good?

“If you don’t believe that people change, grow, evolve as they get older, I don’t know what to tell you.”

I thought about this quote before, during, and after watching Kevin Hart’s latest standup special, Irresponsible. Hart offered this non-apology in response to his decade-old homophobic tweets that resurfaced back in December, ultimately costing him his hosting gig at the 2019 Academy Awards (which he declined). Hart’s career doesn’t seem to be hurting much, though. Immediately after declining the Oscars gig, Hart scored another box office hit with The Upside. He treads familiar territory in Irresponsible, his first Netflix special following a string of successful theatrical releases. It’s fair to wonder if his comments about change were sincere—or if his fan even want him to change.

In his new Netlfix special, Hart returns with more riffs on familiar topics such as family and his own insecurities.

Hart’s self-deprecating approach to most of his jokes still works. His penchant for repeating phrases until they wear you down is as sharp as ever. The comedian presents himself as an open book, mostly talking about his family and sprinkling in stories where he puts himself in a ridiculous situation that gets progressively more absurd. Hart has fine-tuned his technique and writing style over time, but he’s more or less the same guy in Irresponsible as he was in 2009’s I’m a Grown Little Man.

Irresponsible, like all of Hart’s specials, is at its best when Hart is the punchline of his own jokes. His willingness to look foolish is one of his biggest strengths as a comedian. Irresponsible peaks with an extended bit about Hart babysitting a friend’s kid, whom he dubs Great Baby. Hart is awestruck and flummoxed by the Great Baby’s intelligence. While trying to solve a poop-related mystery, Hart questions Great Baby, his dog, and his wife. Each question brings him closer to the answer and plunges him into further humiliation. I laughed until I cried during the bit—then I watched again and did the same thing. Why should Hart change if his product can be this good?

Other bits are less successful, such as when Hart talks about dealing with his kids. He listens to his kids talk on their own, and his response to his daughter threatening his son is, “My son is such a bitch.” In dealing with the frustrations of teenagers, Hart jokes about child violence, conjuring the image of Homer Simpson strangling Bart. It comes across as a lesser version of Bernie Mac’s bit about his sister’s kids. Hart’s version lacks bite, and when he’s in a position of power, his material falls flat. The jokes aren’t even that mean, but Hart isn’t at his best when he’s punching down. That’s always been true of his material.

At this point in his standup career, Hart is a well-oiled joke machine. The only appreciable change is his own level of fame. Irresponsible made me laugh a little less than Hart’s previous specials, but any set that draws laughter tears is still worthwhile. You know what you’re getting in a Hart special, so you already know if this is your bag. Sometimes, there’s something to be said for staying the same.