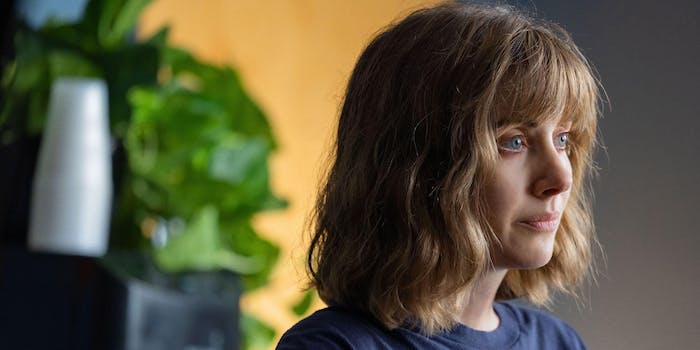 There’s hardly a person in the world who hasn’t been affected by mental illness in some way, whether it was their own of that of a loved one. Despite that, sensitive, thoughtful depictions of mental illness on the screen have historically been rare, and stigma remains strong, especially for “scary” illnesses like paranoid schizophrenia. Alison Brie’s screenwriting debut, Horse Girl, uses real-life experience with that same illness to create a much more sympathetic, if somewhat messy, psychological thriller than is typical.

Brie plays Sarah, the titular horse girl and a deeply awkward young woman. Sarah enjoys her job at the craft store, assisting customers and chatting with her coworker Joan (Molly Shannon), doing Zumba, and binge-watching the show Purgatory over and over. She doesn’t have a lot of friends, and refuses to let go of her attachment to her former horse, Willow, whose new owner doesn’t seem interested in her advice. She has a family history of mental illness—her grandmother had severe hallucinations, and she lost her mother to suicide not long ago. Her life gradually stops making sense as her sleepwalking gets more severe, and she starts having strange dreams.

The film gets a slow start, with about the first half hour focusing on Sarah’s intense awkwardness. Brie has played awkward before—Annie from Community comes directly to mind—but usually with a side of cute or charming. Sarah isn’t cute or charming, but anyone who has had similar social struggles will doubtless feel sympathy pangs. Her roommate, Nikki (Debby Ryan) is kind, but she has her own life. The workers at Willow’s stable just want her gone. She connects to Nikki’s boyfriend’s roommate not just because of any common ground or physical attraction, but because he shares a name with the main character of Purgatory. It feels more like a quirky rom-com between two awkward adults than the thriller it is, until things get moving. And then, they really get moving.

This is Brie’s first time as a writer, and it shows. While the parts drawn from her own experience, particularly her family’s mental history, shine, Horse Girl struggles with its plotting. Well-written thrillers usually have tightly written stories, where all the dangling plot threads weave together in the end to make sense of everything. Many of Horse Girl’s plot beats never really go anywhere, or don’t serve how the story ultimately ended. Much of it would be more at home in the character study the film originally appeared to be. Ideally, a thriller should leave you saying, “It all makes sense now!” Horse Girl, on the other hand, had me cocking my head to the side and saying, “Huh.”

At the same time, however, I’ll take the messiest plot with compassionately written characters over something tightly written that treats its characters as little more than chess pieces to be arranged in the right place at the right time. “Psychological thrillers” in particular tend to be damning toward their characters. A character’s “descent into madness” is typically terrifying and dangerous, playing on society’s fear of the mentally ill, but writers often seem more interested in broadly defined “craziness” than actual symptoms.

But not in Horse Girl. Brie’s experience with the subject matter is just as evident as her inexperience as a writer, and it works wonderfully. Sarah isn’t just “crazy”; she displays symptoms of paranoid schizophrenia. Her mental deterioration seems awfully rapid, but the way it presents—auditory hallucinations, social withdrawal, disordered thinking—has ground in reality. It’s frightening for her, and for those around her, but she’s never actually harmful or dangerous to others.

Sarah is the only real main character, but the supporting cast does an excellent job portraying the people who care about her and are thus affected by her deteriorating mental state. Ryan and Shannon stand out especially. Nikki clearly cares about Sarah, even if they aren’t really friends, but isn’t equipped to deal with her increasingly erratic behavior and the inconveniences it brings. Shannon’s Joan brought tears to my eyes as she tries to understand what Sarah’s going through, treating her shocking behavior with empathy and kindness.

I’ll take a somewhat messy story written with kindness and compassion toward its characters over the most tightly paced thriller any day. The character writing truly is Horse Girl’s greatest strength, what makes it notable instead of a dime-a-dozen straight-to-streaming movie. The setup, with Sarah’s tragedy and sadness and truly agonizing awkwardness, is absolutely essential to its progression and conclusion, as it plays with viewer expectations and true-to-life mental illness symptoms. The film’s last minutes promise to be divisive, if it gains any audience traction, but their impact comes entirely from knowing Sarah and her changing mental state.