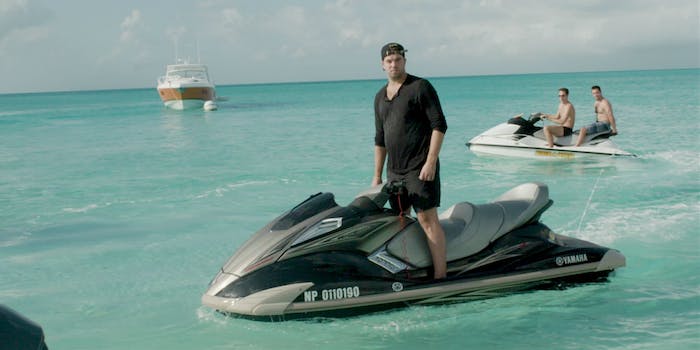 Netflix’s ‘Fyre’ shows the pros and cons of ‘capture everything’

A look back at the festival that aimed to sell 'a pipe dream to your average loser.'

In April 2017, news started to surface on social media about chaos in the Bahamas. Attendees who had paid to go to the sleekly promoted, luxury Fyre Festival were eating cheese sandwiches and staying in FEMA tents. Luggage was being thrown off trucks. People were trapped in airports. No one knew who was in charge.

RELEASE DATE: 1/18/2019
DIRECTOR: Chris Smith
STREAMING: Netflix
The documentary looks back at the disastrous festival, but offers little insight on its mastermind.

In its own modern way, news of this disastrous music festival playing out on social media solidified Fyre Festival’s status. People took great pleasure in seeing this event, for which “influencers” reportedly paid thousands of dollars to attend, fall apart. Joke’s on you. In Netflix’s Fyre: The Greatest Party That Never Happened, we get a closer look at the events leading up to the festival, co-organized by Billy McFarland and rapper Ja Rule. Chris Smith, who helmed 2017’s Jim & Andy: The Great Beyond documentary, directs here, though the word “director” gets thrown around quite a bit in Fyre.

“Capture everything,” the directive for documenting the lead-up to the festival, yields a bounty of expository content. In one early frame, a few of the models assembled for a promotional shoot look confused as Ja Rule tries to get them to run into the ocean (bathing suits optional) at night, even though no one was really directing the “scene.” A few beats later, McFarland explains the business model: “We’re selling a pipe dream to your average loser.” Early on, that pipe dream was advertised as a festival on “Pablo Escobar’s island,” before McFarland botched it and had to move to Great Exuma. We see how bait-and-switch became the foundation, from the misleading location to the initial promo video, which showed sun-kissed, Instagram-famous models lounging on yachts and playing with pigs—a scene that never played out at the actual festival. (McFarland reportedly paid Kendall Jenner $250,000 for one post about the event.)

We know how that turned out: Fyre was hit with a class-action lawsuit and McFarland was sentenced to six years in prison last fall. But Fyre illustrates just how many chances this materialistic, misogynistic status-chaser was given: McFarland was also marketing a credit card for millennials that turned out to be a scam, and in June, he was charged with selling fake concert tickets to events like Coachella and the Met Gala, which again targeted Fyre attendees.

Jerry Media—the media company born out of the controversial Fuck Jerry meme persona—and Vice Studios produced the documentary along with Smith, so the narrative is shaped somewhat by its participants: A Vice journalist and Jerry Media employee are both interviewed. The festival brought in Jerry Media for festival promotion, but no one involved seems to have any real insight about their role in promoting a fraudulent event. Considering Fuck Jerry often trafficked in stolen content on Instagram before growing into a media company, perhaps insight is a tall order. The doc is PR for them.

No non-business acquaintances or members of McFarland’s family were interviewed, so there’s no real context for who this guy is or where he came from. McFarland doesn’t participate in present-day interviews, though Smith told NPR that he wanted to be paid to appear in the doc. So he exists in the background, while in the foreground former employees label him “unflappable but entirely delusional” and remember how he didn’t want to deal with problems, only solutions. One event promoter who worked with McFarland in the past recounts the demeaning solution presented to him when customs withheld a truck of drinking water and McFarland was out of money: “Take one for the team” and provide oral sex in exchange for the water. (He ended up not having to do it, but he was prepared to, which shows the extent of McFarland’s manipulation.)

A few of the scammed attendees also participate in interviews, giving more context to what was happening on the ground and before the event. You feel for McFarland’s former employees—even though they somehow pushed past all the towering red flags—but even more so for the island residents who were enlisted to help set up a massive festival in a place that lacked the necessary infrastructure and then, unsurprisingly, were never paid. While attendees who could already afford tickets won a class-action lawsuit, the scammed residents didn’t have that luxury. In that way, Fyre illustrates the class divide at the heart of this mess, one that McFarland expertly exploited.

In a savage move, Hulu dropped its own documentary, Fyre Fraud, featuring an interview with McFarland, on Monday, the same day the review embargo lifted for this doc. Was this some crafty marketing on McFarland’s part to get his side out before the more damning stuff? Or is this more about two streaming competitors’ SEO wars, as was quickly noted on Twitter? Either way, there are now two documentaries keeping this brand alive and in the consciousnesses, so maybe the joke’s on us.