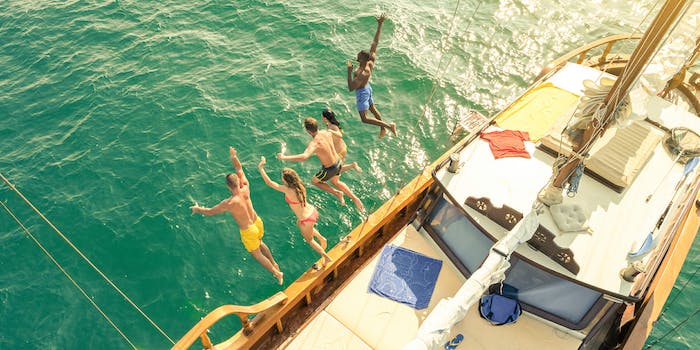 It is even more of a disaster than you may have realized.

When the news of the disastrous, contemptible Fyre Festival broke, many on the web made the swift comparison to Entertainment720—Tom Haverford and Jean-Ralphio’s failed events company from Parks and Rec.

There, instead of successfully building a business, that company wasted funds on having former NBA forward Detlef Schrempf stand in the lobby and do dunks, and by passing out free iPads to visitors.

Even though the joke was funny, the comparison wasn’t meant to be exacting. Because no one could be that ridiculous.

In a must-read report by Vice about the event, Billy McFarland, the 20-something entrepreneur who put on the festival, sounds absolutely beyond parody.

If Fyre Festival seemed last-minute, that’s because it was. McFarland thought of the idea in October 2016 and announced the festival on Instagram a month later, spending millions on models, private jets, and yachts to promote what would be his first-ever large-scale event, sources familiar with the planning said.

He spent $250,000 on a single Instagram post from Kim Kardashian’s half-sister Kendall Jenner and laid out hundreds of thousands more on lesser-name “influencers,” none of whom were paid less than $20,000, one person familiar with the payments said.

But, you know, if you’ve got a well-planned out idea, sometimes some marketing is necessary. Except that this wasn’t well-planned at all.

Serious logistical planning for the festival didn’t even begin until late February or early March — less than two months before the thousands of people McFarland had sold a luxury vacation on a private island were scheduled to arrive.

And they had NO idea how planning a festival would even work.

“There was no infrastructure to even support the equipment. They didn’t even have a loading dock, they had no understanding of what vehicles were on the island to even move the stuff off the ship once it got there,” said [a] supplier. “They said stuff like, ‘Don’t worry about customs; it’s only for a weekend, you don’t have to worry about customs.”

But that didn’t matter. Because they were already out of money when the bills started coming in.

By March, things were starting to get desperate. The festival was running low on cash, despite significant investments from a New York City socialite who also worked with McFarland on his failing millennial credit card company, Magnises.

McFarland and his team started soliciting a second round of investments, said several people familiar with the offering. In at least one meeting with an investor, McFarland intimated that Fyre had spent several million dollars on celebrity endorsements and marketing and now needed cash to pay vendors, staffers, and artists.

Give the whole thing a read, because it’s great.