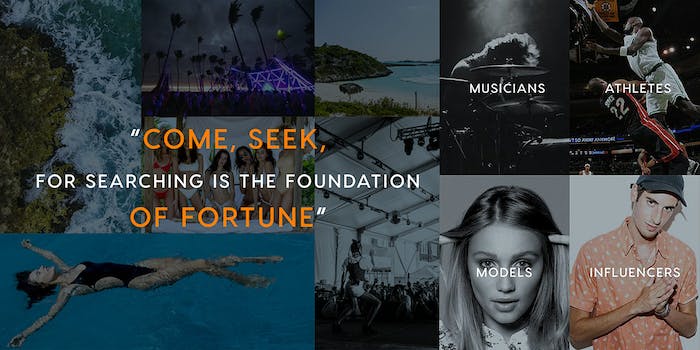 Fyre Festival pitch materials show the limitations of the ‘influencer’

The event was born on social media and could only exist there.

While we’re all trying to figure out if Fyre Festival was a poorly organized venture, a legit scam, or an unreleased episode of Nathan for You, the doomed music festival’s promo materials have become public. I’m sorry but you’ll have to get acquainted with the phrase “Fyre Starters.”

Vanity Fair has the pitch materials shown to potential investors, which boast unfettered access to models and “influencers,” as well as “key personalities” like Bella Hadid and Kendall Jenner (also models). It’s a collapsing artery of bad tech-speak and aspirational lifestyle filtering.

According to Vanity Fair, one person pitched by promoters said more than 400 Fyre Starters (like the above) were brought on to help get the word out about Fyre Festival to their millions of followers. The fest received social media assistance from Elliot Tebele, aka Fuck Jerry, who rose to fame on Instagram for making memes that often involved uncredited jokes from other accounts (the materials refer to his “content strategy” as “thoughtful”) and is no stranger to shady promotion. To add to the credibility slump, after the festival began “key personalities” like Jenner allegedly deleted posts promoting Fyre Festival.

Now, the validity of viral festival tweets are even being called into question.

Fyre Festival, which grew out of the Fyre talent-booking app, was apparently so weighed down by “brand synergy” and analytics and engagement and media impressions that it could never live outside the internet. The materials also use a Rumi quote, but there is no reference to The Hunger Games.