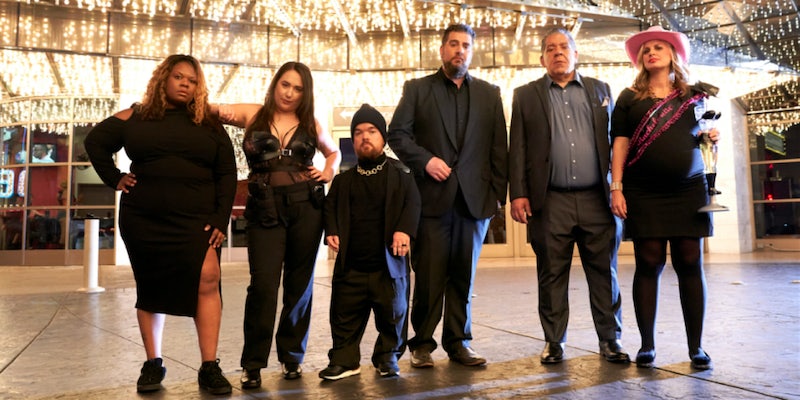 ‘The Degenerates’ finds insight in p***y and d**k jokes

The pussy jokes are plentiful in The Degenerates.

Over the past year, Netflix’s showcase series like The Comedy Lineup and The Standups have offered bite-sized standup sets in contrast to its hourlong, bigger-name specials. The platform tries for a third time with The Degenerates, which showcases edgier, raunchier comics. The somewhat cheesy opening song (I couldn’t help but think of Jackson Maine’s band in A Star Is Born) accompanies a montage of the titular degenerates trying to rob a casino.

Big Jay Oakerson riffs about his 15-year-old daughter in the same breath as his porn habits; he later laments that you can’t say “tranny” anymore and “transgender” is too long, before tying it into a personal anecdote that fails to support his argument. Actor and comedian Joey Diaz—who looks like he could have been on The Sopranos but was actually in a Sopranos parody—leads with a great story about going to prison for kidnapping to establish his degenerate cred, then laments that men aren’t allowed to take their dicks out anymore. It used to be fun! He uses the word “f**” a few times—but only, he argues, because he’s old and that’s what everyone used to say, echoing Louis C.K.’s outdated bit on the homophobic slur.

Speaking of which: We’re entering a new era of comedy, in which comedians like C.K. are finally being called out and held accountable for their own sexual misconduct. That doesn’t negate the need for more explicit comedy or dirty jokes, but comedians have now started addressing these issues, bringing a layer of meta-commentary to the stage. Williams and Christina P. both mention C.K.: Williams suggests men take out their credit scores instead of their dicks, while Christina P. jokes that C.K. sometimes asked permission, and “in my world that’s a gentleman.”

Treyger delivers the standout performance of the series. In addition to pro-sex and pro-porn jokes, she takes men to task for not adequately pleasuring women. She takes a poll: What do men usually want to know after a straight guy friend gets laid? The responses are predictably depressing. They rarely care whether the woman came, which Treyger wraps into a larger conversation about men and women’s sexuality. She brings a measured rage to her set, at times veering from standup into visceral commentary about how women are feeling right now. She has a theory about why women are “so emotional”: “We’re burning our clits off with back massagers.”

That urgency and insight amidst all the pussy and dick jokes marks one of the series’ strengths. While plenty of comedy fans will flock to The Degenerates because it’s free of PC policing, they’ll quickly learn there’s a difference between being edgy and just complaining about not being able to say the things you used to.