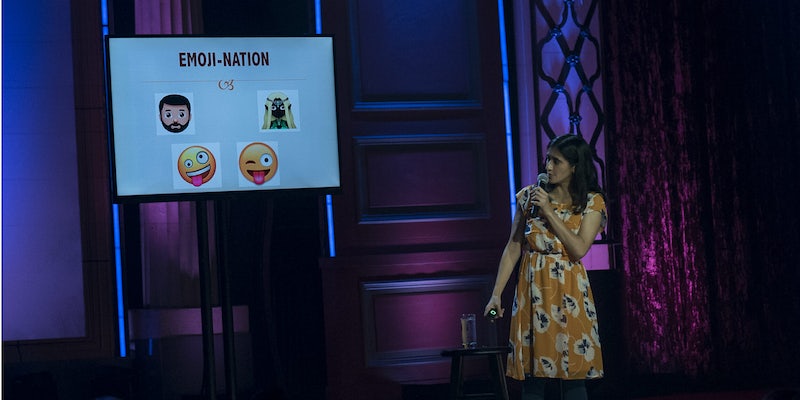 Over the last year, Netflix has debuted a run of specials from marquee comedians, names that are big enough to warrant multiple specials and often, on the backend, critiques about their worldviews and ideologies. The Standups proposes a different kind of marquee.

The second season showcases mid-tier acts with smaller fanbases and gives them 30 minutes to work with. Filmed last fall in Los Angeles, the second season spotlights Aparna Nancherla, Joe List, Rachel Feinstein, Gina Yashere, Brent Morin, and Kyle Kinane, comedians who each have their own fans but could overlap audiences too. It also feels more timely than other marquee Netflix specials.

Morin indulges an Uber joke and commits to a seemingly endless bit about being a “shitty prince” with his driver; Kinane opens his set with a mass shooting joke and segues into a similarly long but better-structured bit about the KKK’s taste in food. Yashere is one of the season’s standouts, addressing roles for Black women in Hollywood, immigration, and Trump’s travel ban with an efficient and energetic set.

There is a thread of anxiety through the season, reflected through different voices and experiences. Nancherla has been open about depression and anxiety in her standup, and in her set, she again talks about her struggle with being antisocial. Her openness about anxiety seems to have found an audience—one Standups bit has even become a meme.

hahahahaha @aparnapkin on the current state of affairs if you have anxiety pic.twitter.com/HimzSw3xtx

“I’m not surprised that people are relating to it,” she says. “I think even as an anxious person, in the last year, I’m kind of like, ‘Well, this has gotten out of hand.’ It’s almost like the media in some ways has become a voice of anxiety in a way that it wasn’t necessarily before. …The speed that we’re getting information at has added this level of urgency to everything.”

At times 30 minutes feels somewhat limiting, so Netflix’s upcoming 15-minute specials will be another interesting experiment. Nancherla says the 30-minute format doesn’t really allow for an arc, but it does let you offer a “sampling.” She devotes half her set to a presentation on the internet’s influence on language, which sounds daunting but she makes it work within the confines. She manages to get in some commentary on weirdo commenters (in a much more effective way than Ricky Gervais in his latest special), analyze her parents’ texts, and dive into the psyche of a Yelper.

“It is kind of funny that everything is now open for opinion,” she says. “But I think you do kind of have to take it in stride. …I do think in the past year I’ve made more of an effort to have more face-to-face interactions with people because I forget that it adds an element of humanity that we sometimes take for granted.”

Nancherla also stars in Comedy Central’s breakout hit Corporate, a dark-comedy look at office culture and malaise that’s filled its Workaholics slot. It’s found an audience that relates to its depiction of anxiety, but the reason Nancherla gives for why the show’s important could also apply to standup comedy: “I think Corporate is very much about just naming the horrible things we sort of take as a given on a daily basis, and I think there’s something very comforting about just naming it, even if you can’t necessarily change it in the short run.”