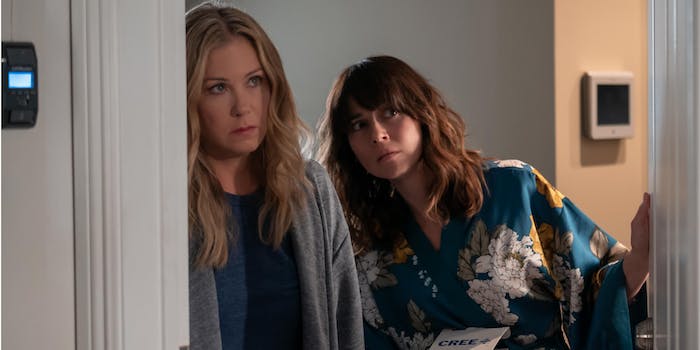 ‘Dead to Me’ is a complex bouquet in season 2

The Netflix show gets more chaotic, but Jen and Judy are still the foundation.

Dead to Me is a dark comedy about secrets and murder, but the series found an audience last May for how it depicted grief and friendship. Jen (Christina Applegate) and Judy (Linda Cardellini) are the show’s totems: One a chasm of sarcasm and rage, the other a people-pleaser, always trying to find the solution.

Dead to Me Season 2

RELEASE DATE: May 8, 2020
CREATOR: Liz Feldman
STREAMING: Netflix
Season 2 advances the story, but doesn’t do much with character development.

They balance each other out, like any good friendship. Is it a healthy one? Season 2 digs a little deeper into that.

The season starts in the wake of season 1’s cliffhanger, as Jen attempts to cover her tracks after the poolside death of Judy’s ex Steve (James Marsden). Exactly what happened that night is teased out in different flashbacks, ensuring we don’t know exactly what happened, which is Dead to Me’s formula. Though the show works best with the Jen/Judy dynamic, season 2 has to validate how and why they’d still possibly be friends—and justify its existence.

More narrative threads are added, pulling up early on with an eye-rolling soap-opera reveal, but then season 2 is a bit more soapy. Jen gets a love interest that’s a little left field but progresses the story. Judy gets a plotline with Michelle (Natalie Morales) the daughter of a new resident at her job, who’s a little more chill than Jen. Judy reveals more of her backstory, and we get an introduction to her mother. But even that—as with other characters who are (re)introduced throughout the 10 episodes—doesn’t really go anywhere.

While grief is still explored, Jen and Judy are trailed more by guilt and uncertainty, that pulse-heightening feeling of a certain dread around the corner. We still get scenes of cathartic fuck-it energy and moments of supportive wine-drinking, but the middle section tries to keep a balance between grounded friendship and increasingly wild suburban hijinks. (There is a great joke about Scarface.)

The finale reinforces that Applegate and Cardellini’s performances are the foundation of Dead to Me: Just 30 minutes of them drunkenly shit-talking would be entertaining (maybe interrupted by dead-eyed neighbor Shandy, who needs more screen time). They both come to more of a realization about who they are and what they need to work on, albeit under incredibly stressful circumstances.

The show certainly knows how to work a cliffhanger (the final scene screams third season), but it puts a few too many pins on the map this season, more scattered than pattern.