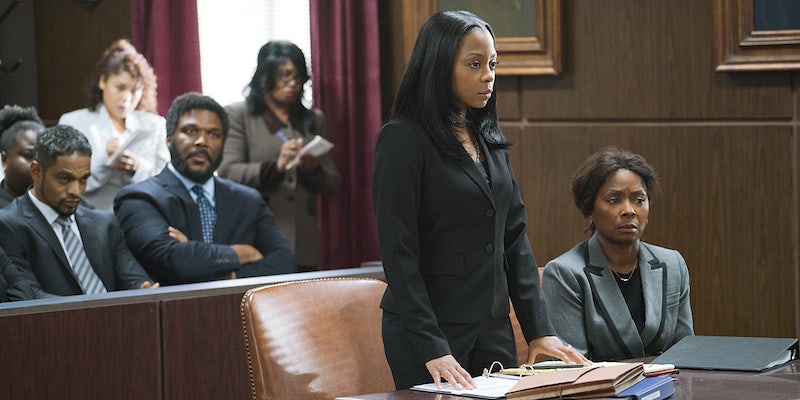 Review: Tyler Perry’s ‘A Fall From Grace’ is both nonsensical and utterly predictable

This is not Tyler Perry's best work.

Writer and director Tyler Perry proves yet again that he is unable to break out of his comfort zone with the Netflix original A Fall From Grace, a so-called thriller that’s littered with tired storylines and undeveloped characters.

A Fall From Grace follows public defender Jasmine (Bresha Webb) after she is assigned a seemingly cut-and-dry case: Grace Waters (Crystal Fox) has pleaded guilty to murdering her husband Shannon DeLong (Mehcad Brooks), and all Jasmine needs to do is work out a plea deal with the district attorney on Grace’s behalf. But there’s something about Grace that makes Jasmine believe she isn’t telling the whole story. Over a series of meetings, Grace finally shares what it takes to make a woman reach her breaking point.

If the plot sounds similar to any of Perry’s other movies, that’s because this film follows his cookie-cutter algorithm to a tee. Once again, an older woman has been taken advantage of by the men in her life, and she needs help standing up for herself. Despite being billed as a thriller, A Fall From Grace lacks originality and a compelling plot. Thanks to its aesthetic, the movie feels dated before you finish the first viewing.

The film’s greatest offense, however, is that its plot makes no sense. Without giving too much away, A Fall From Grace adds twists and turns to the storyline that never amount to anything. At the same time, it’s fairly easy to guess where the movie is headed thanks to heavy-handed hints and a formulaic story. Perry accomplishes the amazing feat of making his plot both nonsensical and utterly predictable.

The characters are poorly written, too, and rife with bad acting. Jasmine is a comically inept lawyer whose partner, for some reason, says she was born to practice law, even though she has never won a case and manages to screw up even the simplest details during Grace’s trial. Grace’s character is never developed, nor are her motives fully explained. Shannon screams “sleazebag” from his first moment onscreen and fails to make a believable romantic interest. The only supporting actor who gives a believable performance is Sarah (Phylicia Rashad), Grace’s best friend.

It’s hard to pinpoint any part of A Fall From Grace that makes the movie worth watching. With its lack of originality, bad plot, and poorly written characters, Perry’s latest effort is better off not existing at all.