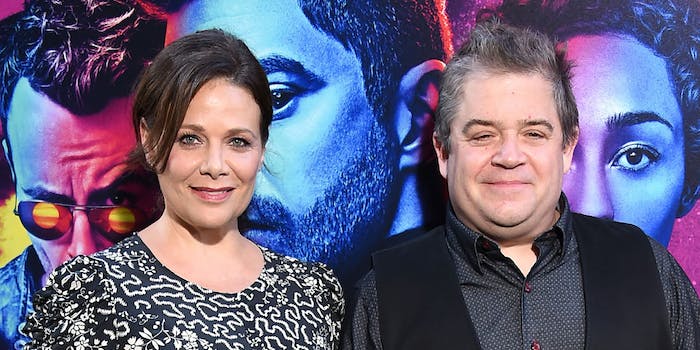 Patton Oswalt and Meredith Salenger are engaged, and nerds are loving it

There were lots of 'Star Wars' references.

Salenger, an actress who’s lent her voice to Star Wars: The Clone Wars and Star Wars: Rebels, posted about the engagement on Thursday. The couple appeared together at the premiere of Baby Driver in June.

Oswalt, a noted Star Wars fan, elaborated on how he asked.

I put the ring in a marzipan Slave I replica and said, "Will you be my Padawan of Love?" She maced me but said yes later. https://t.co/9gIr2yxfP5

It's a great day for Disney shippers who had longshots in the pool. Congratulations to @MeredthSalenger & @PattonOswalt on their engagement! pic.twitter.com/4WJujLuDgj

Carvel tried to get in on it, too, a nod to Oswalt’s longstanding obsession.

@MeredthSalenger If you need a ring bearer, I take the cake. CONGRATS to two of the best! pic.twitter.com/9yojnccEAq

Oswalt was married to and has a daughter with writer and author Michelle McNamara, who unexpectedly passed away in April 2016. He wrote a touching remembrance of her on the anniversary of her death.

In the last month, however, Salenger and Oswalt became more public with their relationship.