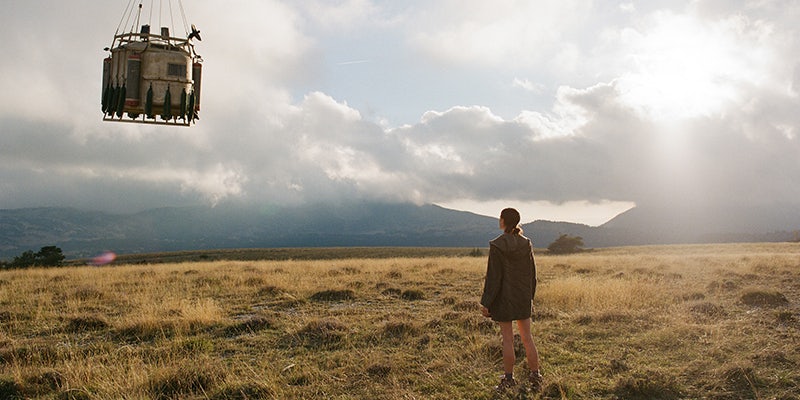 Netflix’s IO is a coming-of-age, post-cataclysmic sci-fi film about a young scientist named Sam (Margaret Qualley)—who is one of the last survivors on Earth, where the atmosphere has become toxic—and her quest to find a way for living beings to adapt to the toxins in the air. After a stranger arrives to take her to a new colony on Jupiter’s moon IO, Sam must choose between risking her life to save Earth or join the rest of existing mankind on its quest to find a new planet.

’Netflix’s IO is a coming-of-age, post-cataclysmic sci-fi film about a young scientist who is one of the last survivors on Earth seeking a way for living beings to adapt to the toxins in the air that fails to stand out in its genre.

It’s difficult for a film to stand out in the saturated post-apocalyptic genre. There are dozens—if not hundreds—of films and TV series about a young woman or man who feels an innate connection to Earth and passionately aspires to rescue mankind and life as we know it. On Netflix alone, viewers can choose between Luxembourg, I Think We’re Alone Now, The Road, The Rezort, The Last Days, The Rain, and more. To stand out in the noise, a film must have a unique plot, feel eerily plausible, and reveal a profound truth about human nature. Unfortunately, IO doesn’t accomplish any of that.

The most frustrating aspect of the film is its lack of plausibility. It’s hard to believe that people just woke up one morning and found themselves choking to death because the air was toxic. In a world where scientists study and monitor the atmosphere daily, wouldn’t there have been a gradual change in the chemical makeup that someone would have noticed? Sam and her father’s solution to the toxicity—adapting to the change in the environment through gradual genetic mutation—should take hundreds of years.

Also, of all the places for humans to flee to, IO would be one of the worst. The moon is notorious as one of the most geologically active objects in our solar system, with over 400 active volcanoes. That doesn’t sound much better than a toxic atmosphere. There just isn’t a moment during the film where the plot feels believable, and the best sci-fi films are supposed to freak out its viewers at least a little bit by mixing in a smidge of scientific truth.

There are just three people who speak in IO. With a cast that lean, Qualley and her co-lead Anthony Mackie are under a lot of pressure to carry the entire tone. In a movie with so much silence, it’s important to make every uttered word mean something. While there are certainly powerful moments between Qualley and Mackie, there aren’t enough to keep the momentum of the film going. Even though IO clocks in at just under an hour and a half, parts of the film drag.

The profound truth that IO chases is admirable: the idea that there’s no bigger meaning for life than human connection. Although the cast talks about the idea, it never seems realized by anyone, which is disappointing. There’s never a moment where viewers feel a genuine connection between Sam or Micah, which seems imperative to include if a film’s central truth is about the need for human connection.

The one thing that IO has on lock is a plot that’s impossible to guess. Viewers never know what will happen next, mostly because it’s impossible to tell what the protagonist Sam is thinking. She only narrates in the beginning and end of the film, leaving viewers to guess her motive and feelings in-between.

If you don’t mind a film with a generic and implausible backstory, but that keeps you on your toes plot-wise, IO might be worth your time. But if you’re looking for the type of sci-fi film that challenges stereotypes, breaks barriers, and leaves you thinking differently about the world—look elsewhere.